Hardly photographed before: Minute frost heaving in lime mortar. The ice crystal lifting the mortar flake at the centre is about 2 mm high. Note ice whiskers also below other flakes. Photo by Per Storemyr

Frost is here again and thus weak building materials are at risk, for example traditional lime mortars applied during the last summer season. Over the last few days I was able to observe frost heaving in a lime mortar that has not properly hardened/carbonised due to recent rainy and moist weather. As far as I know, no one has previously documented such ice crystal growth, on a micro-scale. The phenomenon is akin to frost heaving in a soil profile: The force of growing ice whiskers lifting the uppermost parts of the soil.

Last winter I reported on this website about frost weathering at the Millstone Park limekiln in Hyllestad, Western Norway (see this article, with references). Since there are generally very few reports and images of actual, “live” frost weathering on cultural heritage, I documented the phenomenon with close-up photography, showing the fascinating, diverse micro-world of frost affecting lime mortar and stone (see photo below). But I was not able to photograph the actual “heaving” of minute flakes by ice crystal growth – the actual destruction! 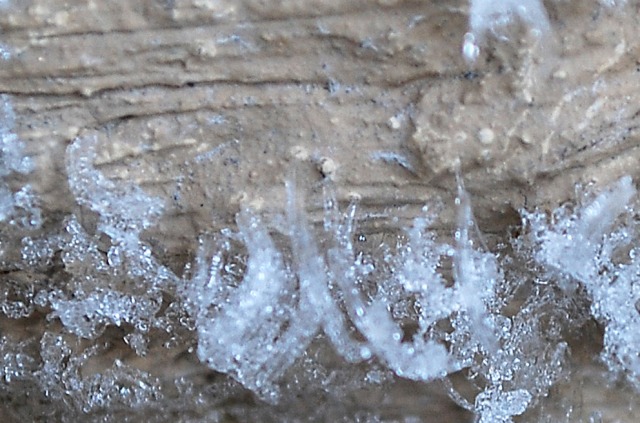 Minute ice whiskers at the Millstone Park limekiln in 2017. Width of image c. 1 cm. Photo by Per Storemyr

Over the last summer the limekiln at Hyllestad has been restored and local, feebly hydraulic lime mortar has been applied on its outside masonry joints, mainly as “hotmix” (slaking burnt lime together with sand for immediate use). All joints were compacted to avoid fissures and lightly scraped on the surface, to allow for as quick carbonation as possible. In the interior we have used soapstone and clay mortars. The restored kiln was completed in early September, and the first burning will take place next year (2019).

The north side of the Millstone Park limekiln. The roof above protects most of the kiln, but not the north side, which is regularly exposed to driving rain. Photo by Per Storemyr

Then came the infamous West Norwegian rain! It has rained almost continuously for two months now. It has been moister than you can imagine! And then came the frost. Suddenly. Minus 7°C in a late October, starlit night. Followed by ice crystal growth and frost weathering.

And “live” heaving of mortar flakes at the kiln! Both minute and larger-scale flakes are, indeed, heaved by ice-crystal growth!

Hardening and carbonation of lime mortar

We knew that moist weather might greatly inhibit carbonation, the hardening of fresh lime mortars, when slaked lime – Ca(OH)2 – is supposed to take up carbon dioxide from the air, making a durable “glue” – CaCO3. Quick carbonation is crucial for lime mortars applied at structures exposed to the elements, if they are to survive the next winter. But when extremely moist weather prevails, there is little you can do, except protecting against more rain, more moisture. Moisture is essential for carbonation, because moisture carries carbon dioxide, but excess, free moisture may be disastrous. Because it can grow to ice crystals when temperatures fall.

This is just what happened at our limekiln.

We wanted to experiment. So we protected parts of the restored kiln from driving rain, while other parts were left largely unprotected (see photo above). Due to the moist weather, none of the lime mortar joints, protected or unprotected, was able to sufficiently carbonise over the last two months. We tested it by scraping the joints: Below the 2-5 mm hard surface the mortar was still relatively “loose”.

Poorly hardened lime mortar (brownish) at the Millstone Park limekiln in October 2018, below a light layer of hardened/carbonised mortar at the surface. The mortar was applied in August 2018. Photo by Per Storemyr

But it was only the unprotected joints of the kiln that started to seriously weather when frost arrived in late October. They obviously carried excess moisture.

Driving rain mainly affected the north side of the kiln over the last two months. Though there are smaller signs of flaking and other, possibly frost-derived weathering phenomena at all parts of the kiln, the weathering is not substantial and generally at the “microscopic scale”.

Not so at the north side. Here, scaling/exfoliation of the joints is destructive. In addition, we could easily see larger lenses of ice on the surface of the mortars, seemingly not doing much harm, but indicative of the moist masonry.

Ice-formation (dark grey) on the surface of mortar joints at the Millstone Park limekiln, indicating excess moisture in the masonry. Width of image c. 15 cm. Photo by Per Storemyr 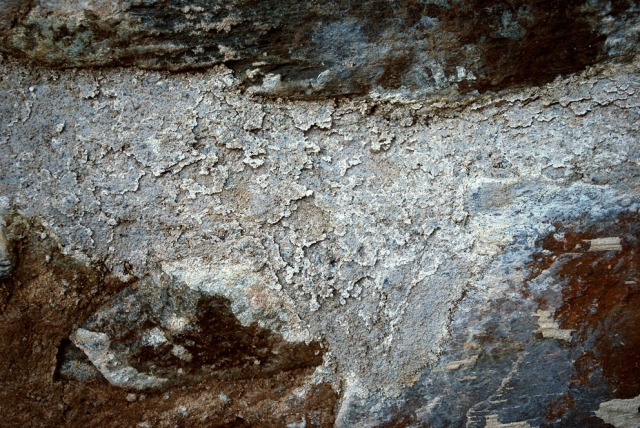 Scaling/exfoliation of mortar applied in August 2018 at the Millstone Park limekiln. After frost in late October 2018. Width of image c. 40 cm. Photo by Per Storemyr

Close-up of scales at the lime mortar on the Millstone Park limekiln. The scale are 1-3 mm thick. Photo by Per Storemyr

Then, on close inspection, it is the outermost, already hardened part of the mortar that gives way to frost weathering. The upper 1-3 mm scales off. Beneath the scales and flakes, there is mortar not yet properly hardened.

And in between: Ice crystal growth in the form of whiskers. A micro-version of growth as we normally see it in a soil profile; long ice whiskers “heaving” the soil.

Minute ice whiskers “lifting” scales off the surface of mortars at the Millstone Park limekiln. Whisker size c. 2 mm. Photo by Per Storemyr

Ice whisker growth in a soil profile in Millstone Park. Lifting the uppermost part of the soil. Just like in the lime mortar at the nearby limekiln. The whiskers are c. 10 cm high. Photo by Per Storemyr.

As the weather turned milder, the whiskers changed form to ice lenses and soon they melted. It was during this process that the flakes really started to fall down; no ice to keep them together anymore.

It is thus clear that ice whisker growth, feeding on excess moisture present in the masonry, can be responsible for both larger-scale and minute flaking of vulnerable lime mortars. This has consequences for interpretation of such damages when observing in mild summer weather. Often, salt crystallisation is held responsible, but it may equally well be ice whisker growth under special weather conditions in the cold season.

The obvious remedial measure to avoid damages is to protect masonry with newly made lime mortar against rain and moisture, which is, of course, also done in most restoration projects at northern latitudes. But it may not be enough if weather conditions are as moist and harsh as this autumn in Hyllestad. In such cases one has to live with it, undertaking regular repairs. We will have to repair the Hyllestad lime kiln next year…

I work with the archaeology of old stone quarries, monuments and rock art. And try to figure out how they can be preserved. For us - and those after us. For the joy of old stone!
View all posts by Per Storemyr →
This entry was posted in Heritage destruction, Monument conservation, New projects, Weathering history and tagged frost heaving, frost weathering, Hyllestad, lime burning, lime mortar, limekiln, photography. Bookmark the permalink.