Mickey Mouse in rock art at Gharb Aswan (Egypt): Was he fond of sound?

Mickey Mouse at Gharb Aswan. Tracing by Per Storemyr (after own photo)

Though Prehistoric rock art certainly had a meaning, its implications usually remain mysterious for us moderns. But sometimes the rock art conveys funny things to speculate on. What about big-eared Mickey Mouse at Gharb Aswan in Upper Egypt: Was he particularly fond of music?

Mickey may have been carved in the Neolithic or Epipalaeolithic period, some 6.000-10.000 years ago.

This is how Mickey looks like. Pecked in a little “depression” of colour change, caused by various oxidation states in the Nubian sandstone, followed by pecked lines. Photo: Per Storemyr 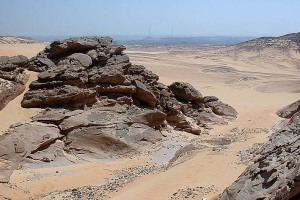 This is the small valley of the howling winds. Suitable for a Prehistoric rock concert? Photo: Per Storemyr

Since then he has endured the fierce and howling winds in a small re-entrant close to famous St. Simeon’s Monastery. He seems to be special; I have not come across similar images on fieldwork in Egypt or in the literature on North-African rock art.

It would an understatement to declare Mickey’s ears as small and neat, and thus, given his equipment, one may ask if he (eh.. rather his maker), was particularly fond of the sounds of the howling winds? For the winds are really terrible at this location, more so than at hardly any other spot I know of at Gharb Aswan. I have walked the area regularly for many years, also during sand storms…

The interesting thing is that Mickey is not alone in his wind-blown, small valley. He is accompanied by strange lines, a few crocodiles, some other hard-to-understand animals and a couple of humans with big penises; the latter of which is an important trait of the Epipalaeolithic rock art in the Nile Valley. But there are also some few intensely pecked spots, a feature that makes one think about the phenomenon of rock gongs, the making of sound by banging on rock with a stone.

Though apparently younger, rock gongs have been well attested further south in the Nile Valley, especially around the Fourth Cataract in North Sudan. And there are many other rock art sites across the world where sound may have played a prominent role. So it may not be entirely coincidental that Mickey was carved at just this place.

But did the Prehistoric folks depict him as spectator for their rock concerts, with mother nature in charge of the howling background music? Or was Mickey himself the band’s drummer? Speculation aside, he is at least much too old to have been invented by Walt Disney!

There is much Prehistoric rock art at Gharb Aswan, and you can have a look at these papers about Mickey’s world:

(With kind permission from Archéo-Nil/Cybele and the Sahara journal)

And see this site about rock art at the Forth Cataract. Here are papers by Cornelia Kleinitz on rock gongs.

I work with the archaeology of old stone quarries, monuments and rock art. And try to figure out how they can be preserved. For us - and those after us. For the joy of old stone!
View all posts by Per Storemyr →
This entry was posted in Ancient Egypt, Archaeology, Rock art and tagged Ancient Egypt, Gharb Aswan, rock art. Bookmark the permalink.