All roads lead to Rome! Basalt paving at Forum Romanum. Photo: Per Storemyr

When in Rome… What else can you do than to discuss Norwegian archaeology!? So we did, at the beginning of this week, 30+ archaeologists and scientists at a workshop within the Norwegian Research Council’s network programme “Cooperative Research” (NO: Forskning i fellesskap). This programme, running until 2015, aims at bringing the various Norwegian archaeological university museums together to carry out innovative research in the areas of early settlement, farming, and the so-called “outfield” (NO: utmark), the land beyond settlements and agricultural fields.

When in Rome… Norwegian archaeologists tend to end up at The Norwegian Institute, in Trastevere, which hosted our two-day workshop on “outfield archaeology”. We carried out our presentations and discussions in three parallel sessions; ancient reindeer hunting in the mountains, grazing and life at the alp, and iron and soapstone procurement in moors and woods.

When in Rome… it is hardly possible not to notice that the ancient Romans were totally dependent on iron and stone. It made their world expand. Likewise in Norway, with massive procurement of bog iron ore and soapstone from roughly the Early Iron Age, some 2500 years ago. Kindly invited to join the research network, I feel at home in the material procurement group. And so my presentation was on possible Iron Age traditions at the many medieval stone quarries in Central Norway.

When in Rome… what can be more natural than to contemplate the relationship between the mighty Roman Empire and Norway, the tiny outpost up north, far beyond the limes? Old Norway was, indeed, influenced by the Roman Empire. It may, for example, have been Norwegian mercenaries in the Roman army that brought the rotary quern – for making flour and bread – up north almost 2000 years ago.

When in Rome… stone maniacs tend to look for ruins to admire the marmi of the Romans. They thus navigate to Forum Romanum. So I did. And the rest of this blog post is dedicated to what made my heart jump. 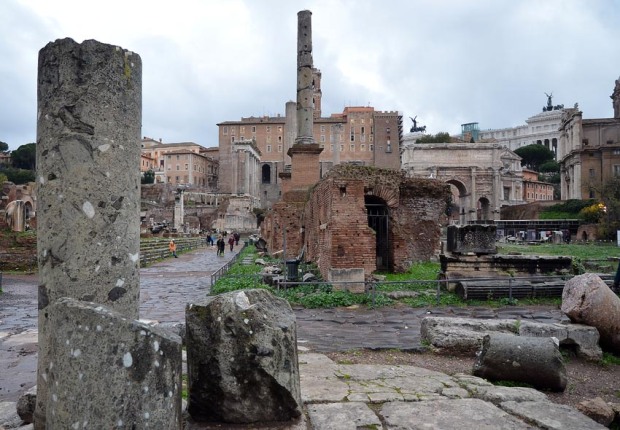 Verde Antico from Larissa in Greece at Forum Romanum. Photo: Per Storemyr 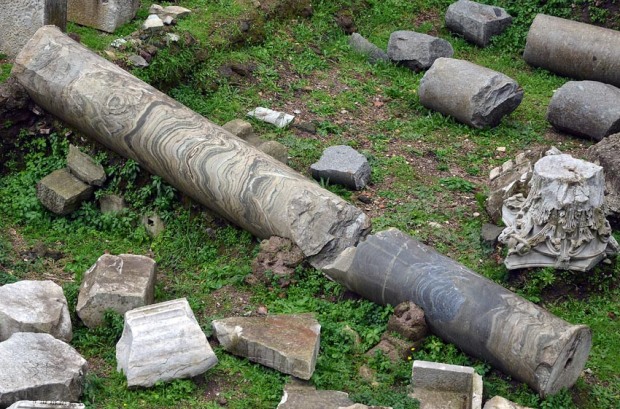 Marmo Cipollino from Karystos, Evia in Greece at Forum Romanum. Photo: Per Storemyr

Wherever you are, take a look at this website, www.norark.no, to get a glimpse of the diversity in contemporary Norwegian archaeology. It is a website set up within the  research network mentioned at the beginning of this blog post.

I work with the archaeology of old stone quarries, monuments and rock art. And try to figure out how they can be preserved. For us - and those after us. For the joy of old stone!
View all posts by Per Storemyr →
This entry was posted in Archaeology, New projects, Norway, Old quarries and tagged marble, Norway, quarry, Rome. Bookmark the permalink.