The Roman “el-Deir” road heading out from the West Bank at Aswan. It bypasses the whole First Cataract of the Nile and joins the preserved Roman roads in Lower Nubia. Photo: Per Storemyr

The long-awaited book on Desert Road Archaeology in Ancient Egypt and Beyond finally seems to be here! Edited by Frank Förster and Heiko Riemer of Cologne University, and with 25 individual contributions, it is the yet most complete survey of ancient desert roads in Egypt. My own contribution to the book is written with Elizabeth Bloxam, Tom Heldal and Adel Kelany; a chapter on the amazing ancient roads at the west bank of the Nile at Aswan, in the First Cataract region. We review the area’s complex network of long-distance Pharaonic and Roman roads, more recent camel trails, and not least the best-preserved quarry roads in Egypt; the 20 km paved and cleared network from the “quartzite” quarries at Gebel Gulab and Gebel Tingar. Read extended abstract, view paper at academia.edu, see maps and view image gallery!

Our paper is based on archaeological survey from 2004 to 2008, carried out within the QuarryScapes project. Also, it uses satellite imagery, especially Google Earth, which is an eminent tool in “following” desert roads.

A most significant find is a broad, cleared road leading from West Aswan, bypassing the difficult terrain along the First Cataract and connecting with previously known Roman roads in Lower Nubia. This implies that up to 100 km of the Roman roads mentioned in the famous, probably 3rd century AD Antonine Itinerary is still preserved in this region. The survey has also confirmed a previous account of a partially cleared road to the Kurkur oasis that may date to the Pharaonic period.

The previously known 20 km long quarry road network associated with the major silicified sandstone (or “quartzite”) quarries at Gebel Tingar and Gebel Gulab has been re-interpreted and shown to consist of specific logistical units of New Kingdom and Roman date. These paved and cleared roads are distinguishable from the much broader, cleared desert roads.

Camel caravan trails, which may have antecedents as very old donkey tracks and general travel routes, criss-cross the area, leading to at least two main termini by the Nile; one opposite the ancient settlements at Elephantine and Aswan, another further north by Wadi el-Faras/Sheikh Mohammed. The latter discovery adds to the significance of this previously little-known place by the Nile.

Archaeological features along and at the termini of the routes are discussed, especially large fields of upright stones, which are considered sacred places in this multilayered archaeological landscape. Such standing stones were in part put up and used by travellers heading out in the desert or coming back from a successful journey.

And make sure to have a look at the leaflet for the book. The publisher, the Heinrich-Barth-Institute, says: Recent exploration has revealed an amazing network of ancient roads and paths crossing the forbidding Saharan desert. This evidence broadens scientific horizons and launches a fascinating new field of archaeological research.

Part of West Aswan across the Nile as seen from a hill above modern Aswan. In the middle is Gebel Qubbet el-Hawa and the Tombs of the Nobles, at the right side Gebel Gulab can be seen. Photo: Per Storemyr

Map of desert roads and trails on the west bank of the Nile in the first cataract region and beyond. The cleared roads are verified in the field, or located with the aid of Google Earth. Sections between Kalabsha and Dakka have been reproduced from Hester et al. (1970: fig. 1). The location of selected routes of camel caravan trails is approximate and based on Survey of Egypt (1949) and Army Map Service (1959). Map: Per Storemyr

Map based on QuarryScapes survey of long-distance cleared roads, camel trails and fields of upright stones at West Aswan. Map: Per Storemyr

The Roman “el-Deir” road heading out from the West Bank at Aswan. It bypasses the whole First Cataract of the Nile and joins the preserved Roman roads in Lower Nubia. Photo: Per Storemyr

El-Deir Road and accompanying camel paths at the eastern margin of the Gallaba Pediplain, heading towards one of the peaks at Gebel Sidi Osman. Gebel Tingar can be seen to the extreme right. Photo: Per Storemyr

The vast field of upright stones NW of the sanctuary (top of hill) at Gebel Tingar. Photo: Per Storemyr

The central field of upright stones at the southern margin of Wadi el-Faras, looking north. A well-worn path leads to a stone circle in the middle of the plateau. Photo: Per Storemyr 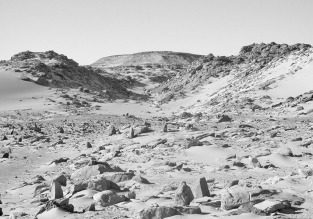 Part of a large field of upright stones in a side wadi to Wadi el-Tilal, about one km north of St. Simeon’s monastery, looking north. On the hill to the right is a possible Early Christian hermitage. Photo: Per Storemyr 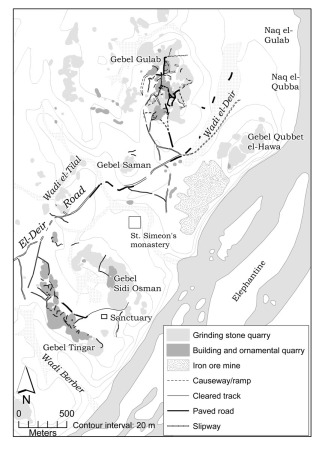 Map based on QuarryScapes survey of quarry roads at West Aswan. Note that roads are drawn with double lines (to indicate width), whereas they are shown with single lines in the legend. Map: Tom Heldal/Per Storemyr

Causeway descending the southern side of Gebel Gulab from a probably New Kingdom quarry location (in the front). Photo: Per Storemyr

The paved New Kingdom road along the northern margin of Wadi el-Deir towards the Nile by Naq el-Gulab. This road connects with causeways descending from Gebel Gulab. Photo: Per Storemyr

Looking east along the broad ramp leading from the extraction area (right) of the unfinished obelisk of Seti I at Gebel Gulab. Photo: Per Storemyr

Route of the ancient quarry road that leads from the Gebel Tingar sanctuary to the Nile opposite Elephantine. This road has been heavily destroyed by modern traffic. The large building is the mausoleum of Aga Khan. Photo: Per Storemyr

A series of well-worn camel paths descending from the SW into Wadi el-Faras, looking south. Photo: Per Storemyr

Some modern sandstone quarries at West Aswan are small, artisan-type quarries, where the donkey is still the most important mode of transport. This is the way transportation of grinding stone from the ancient quarries in the area would have been undertaken. Photo: Per Storemyr

I work with the archaeology of old stone quarries, monuments and rock art. And try to figure out how they can be preserved. For us - and those after us. For the joy of old stone!
View all posts by Per Storemyr →
This entry was posted in Ancient Egypt, Archaeology, New publications, Old quarries and tagged Ancient Egypt, ancient egyptian quarries, Aswan, desert roads, Gharb Aswan, Nubia, Roman roads. Bookmark the permalink.

Leave a Reply to Per Storemyr Cancel reply