Abandoned, snow-covered millstones in the Stone Cross Quarry. The quarry has its name from co-production of Early Medieval stone crosses. Photo by Per Storemyr

The Hyllestad Millstone Quarries  are accessible for everybody throughout the year. You can walk wherever you like, admiring this largest quarry landscape from the Viking Age and the Middle Ages in Norway. You can even book a guide if you want. But there are, of course, not many people wandering about now in winter. People prefer the summer, when our Millstone Park is also open to the public for museum experiences and guided tours. Yet, a walk in the snow may reveal more of this unique quarry landscape than in summer, when all things green effectively prevent grasping the monumentality of some of the quarries.

Hence, we made a walk in the snow just behind our house yesterday, my son Tarald and I. There is rarely much snow in Hyllestad, so walking went just fine. The nearest quarry at Øvre Myklebust is one of the largest, individual ones. But although it is close to 10 metres high, it is dwarfed by tall firs – seemingly less now than in summer. 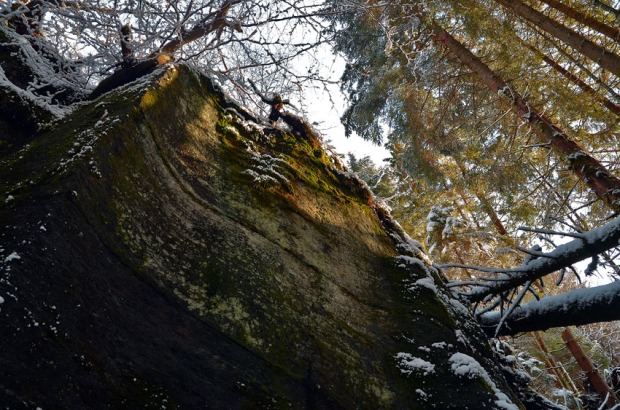 Quarry wall at Øvre Myklebust. Almost 10 metres high, this is one of the larger individual quarries in Hyllestad. Photo by Per Storemyr

However, the quarry layout is easier to grasp when millions of leaves are sleeping: This is a “classic” quarry, in our case for millstone production, mainly for watermills in the Middle Ages, but similar layouts can be seen in all types of quarries that were operated manually (with picks and chisels) – throughout the world from the earliest times on: Waste from the production was disposed of in heaps in front of the quarry wall, far enough away in order not to prevent efficient stone extraction.

In our case there are two-three waste heaps, one of them separated from the others. This also makes sense, since there was a need for easy access to the bottom of the quarry as extraction went downward. People and products needed a track to get out! To get to the adjacent quarry track for transporting the millstones, presumably by some sort of sledge, to the fjord for export.

“Classic” quarry at Øvre Myklebust, with the quarry wall at the rear, two waste heaps in the front and access track in between. Photo by Per Storemyr

Similar quarry layouts can be seen throughout the Hyllestad quarry landscape, also in the Millstone Park, which is the main quarry area on display for visitors. But here it is slightly harder for lay people to grasp this important – and timeless – way of organising a quarry.

Quarry walls in the Millstone Park at Hyllestad. Photo by Per Storemyr

Wandering on, we naturally ended up in the Millstone Park, now snow-covered and not exactly teeming with life. But there is activity here also in winter, such as when students from the local school come every second Wednesday to have their classes in heritage and craft. 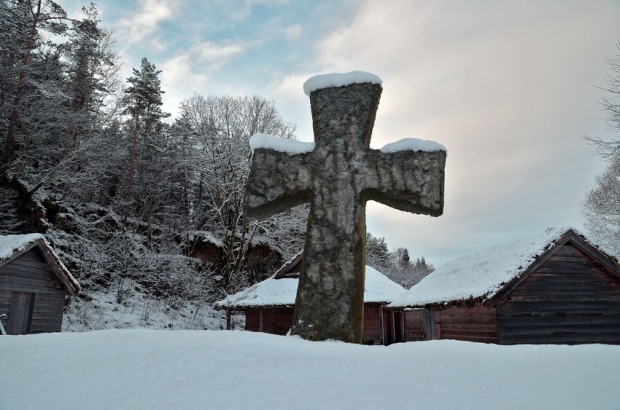 Copy of Early Medieval Stone cross in the Millstone Park. Such crosses, often much taller and often produced in Hyllestad, were raised all along the West Norwegian coast in the early times of Christianity up north. Photo by Per Storemyr.

The main symbol welcoming visitors in the Millstone Park: A millstone, put up when the Norwegian Queen inaugurated the Park back in 2002. Photo by Per Storemyr

Yet, there will not be much happening in the Park until the season slowly starts with the Hyllestad seminar in late April (a popular scientific seminar on all things relevant to the millstone quarries). And in June the visitor season is sparked off by a market in the Park. By then we will also know whether UNESCO finds the quarries worthy of inscription on the World Heritage List (as part of the Viking Age Monuments and Sites nomination).

Exciting times ahead! And as a member of the little team responsible for the millstone quarries, I can use some of the time before the season begins to contemplate on suitable maps of the quarry landscape for visitors. Google Maps is an option, and below is a tiny beginning, showing the places we visited on our winter walk.

And literature for those interested in quarrying techniques at Hyllestad:

Map (unfinished and made for trial purposes only)

I work with the archaeology of old stone quarries, monuments and rock art. And try to figure out how they can be preserved. For us - and those after us. For the joy of old stone!
View all posts by Per Storemyr →
This entry was posted in Archaeology, Norway, Old quarries and tagged Hyllestad, Kvernsteinsparken, millstone, Norway. Bookmark the permalink.