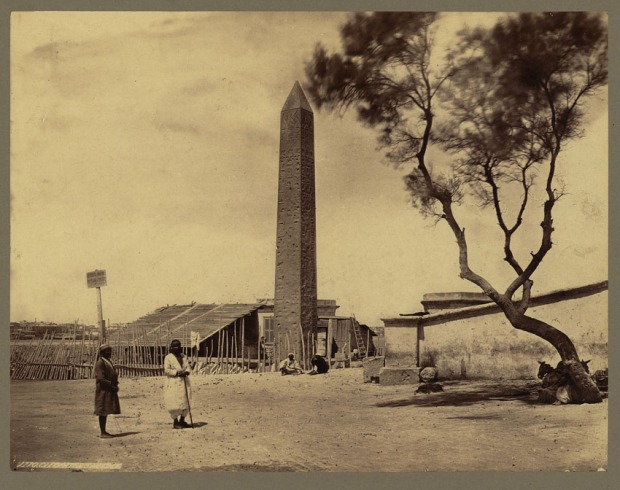 The New York obelisk at Alexandria in the late 1850s. Source: PPOC

Historic photos are essential for research on monument weathering. With free internet access to archives, such photos are now easier to find than previously. Below, I will show the case of Cleopatra’s Needle, a famous Ancient Egyptian obelisk transferred to New York in 1880. Its severe weathering occupied Erhard Winkler, a pioneer on the history of monument weathering. But Winkler overlooked a key photo that would have seriously altered his interpretations.

“Cleopatra’s Needle” is not only one, but a collective, popular name of three New Kingdom obelisks that were transferred from Egypt to the western world during the colonial era of the 19th century. The French brought their Needle from the Luxor temple to Paris’ Place de la Concorde in 1836, whereas the English almost lost their obelisk achieved in Alexandria to the storms of the Bay of Biscay, but eventually managed to erect their loot on London’s Victoria Embankment in 1878.

The Americans secured a safer travel for their obelisk, the “sister” of the London exemplar, putting it up under great fanfare on Greywacke Knoll in Central Park in 1880.

The Paris obelisk, still in almost perfect condition, has the simplest history: It was quarried from Aswan granite under the reign of Ramesses II and shipped to Luxor, where it apparently stood for more than 3000 years before it went to France. The “sisters” of London and New York fared less easily; they were also quarried in Aswan, but both went to Heliopolis (Cairo) during the reign of Thutmose III, where they were probably tossed off their plinths during the Persian invasion, which destroyed the city (525 BCE).

With the appearance of the Romans, many obelisks were moved to The Eternal City, but the “sisters” in Heliopolis only reached the coast of the Mediterranean at Alexandria (12 BCE).

Until being relocated in 1880, the New York obelisk seems to have stood upright throughout the nearly 2000 years since the Roman period, but its London companion fell over at some stage after the 13th century, probably as a result of an earthquake (1301?).

The obelisks at Alexandria around 1800. Source: Description de l’Égypte

Weathering and conservation with paraffin

As Erhard Winkler set out to explain the heavy weathering of the New York obelisk, he took it for granted that it was in good shape before it left Egypt, like the London, and especially the Paris obelisks. However, he noted that the bases of the obelisks were poor, a phenomenon ascribed to the destructive forces of salt weathering. Practically all Egyptian obelisks are damaged at their bases since they have sucked up soluble salts from ground water, sand and debris over millennia.

Now, Winkler expanded the theory of salt weathering: Since both the New York and London obelisks had been lying prostrate on the ground, partially covered by sand, for long periods of time, salts would have entered not only the bases, but the entire monoliths. Additionally, sea spray from the Mediterranean would have affected the obelisks as they stood by the coast for nearly 2000 years.

According to Winkler, the dry Egyptian climate prevented the salts to cause much damage. Only when relocated to the moist European and American weather the obelisks started to suffer; the salts “woke up” leading to loss of dozens of kilos of disintegrated granite in a few months, especially along the bases. The London obelisk was “sealed” with paraffin wax just after arrival, while the same measure was carried out in New York somewhat later. In essence, this lack of immediate action was, for Winkler, the main reason why the New York obelisk is so badly weathered. He even stated that the London paraffin treatment is one of the very few success stories in the history of modern stone conservation.

The New York obelisk from the late 1850s until today. Sources: PPOC and Wikipedia (images enhanced)

A photo telling another story

If Winkler had seen one of the earliest photos of the New York obelisk (top photo in this article), he might have reached another conclusion. This photo, now in the archives of the Library of Congress and available via its “Prints & Photographs Online Catalog” (PPOC), was taken by famous photographer Francis Frith between 1856 and 1860. It shows an obelisk with a west face (NY reference), which is only in marginally better condition than today. The weathering continues along part of the south face, whereas other photos taken before the transfer to New York show that the east face is in good repair, just as today.

The implications are obvious: Paraffin treatment is hardly a good explanation for the difference in weathering observed between the New York and London obelisks. The explanation must be sought much further back in history. In doing so, we can still acknowledge Winkler for his theories on salt weathering, but such weathering must have started well before the obelisks were transported to the western world. It is most telling that the Paris obelisk, which has stood upright since the New Kingdom, is in better repair that both its New York and London counterparts. Thus, the complex history of the latter pair is clearly important when trying to figure out the weathering processes. However, any further explanation, especially on the difference between the “sisters”, is yet in the realm of speculation. We simply don’t know the historic details that may lead to a fair understanding.

Winkler’s study of obelisk weathering sprang from his dissatisfaction with ruling theories on monument weathering from the 1960s onward. Until quite recently urban air pollution was seen as the major cause of such weathering, but is now toned down in favour of the diversity of weathering agents that may have been active throughout the life-time of monuments. In this sense, the new findings presented in this article reinforce Winkler’s perspective.

Winkler concluded his research with a lesson learnt, promoting the practice that objects arriving in American museums from desert regions are routinely stripped of entrapped salts in distilled water to avoid salt weathering problems. Is this lesson the right one, or did Winkler make the classical error of generalising too broadly from a case study? In many cases it might well be that leaching objects of their salts is a good treatment, but the lesson is that each monument has its own particular history that needs to be surveyed accordingly, for example using historic photos among other sorts of tools.

And the weathering of Cleopatra’s Needle of New York City is still not resolved. But now we know that it had weathered badly already before it went on its long journey across the ocean more than a hundred years ago. We also know that the Paris obelisk, with its much more straightforward history, is in far better repair. 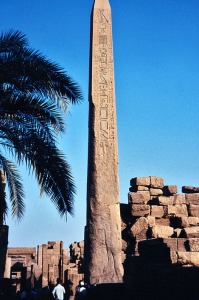 Obelisk of Thutmose I at Karnak

But this, of course, doesn’t imply that monuments with a straightforward history are less prone to weathering. Take the example of the obelisk of Thutmose I at Karnak: It has stood for 3500 years at the same place, but is more damaged than probably any obelisk that went on journeys across oceans.

This could mean that we have to trace the causes of obelisk weathering right back to the geological deposit from where most of them originated – to the granite quarries of Aswan, to the varying properties of the stone and to the techniques by which the obelisks were extracted. And there is salt in the quarry – at the lowest levels along the canal which was used to transport the monoliths to the Nile. But this is another story that I will take up in this blog at a later date.

Location of the NY obelisk

I work with the archaeology of old stone quarries, monuments and rock art. And try to figure out how they can be preserved. For us - and those after us. For the joy of old stone!
View all posts by Per Storemyr →
This entry was posted in Ancient Egypt, Archaeology, Monument conservation, Weathering history and tagged Alexandria, Ancient Egypt, Aswan, Cleopatra's Needle, granite, Heliopolis, historic photos, London, Luxor, New York, obelisk, Paris, weathering. Bookmark the permalink.