Ten quarries of Ancient Egypt: 5 – “The loner” at Chephren’s Quarry 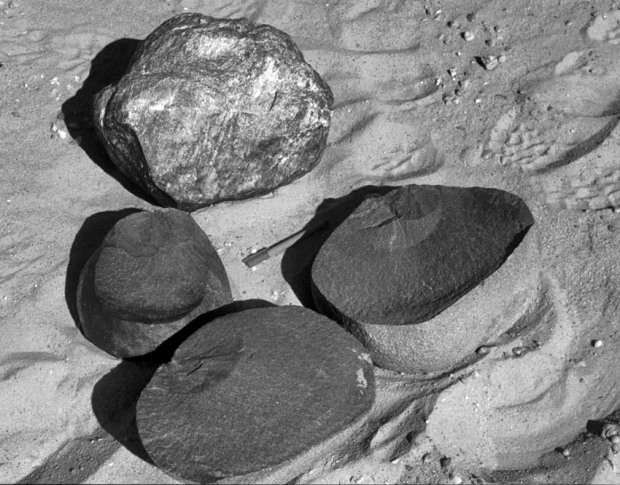 In the middle of nowhere, by Chephren’s Quarry. Who was this guy that left the stones here almost 5000 years ago? Photo: Per Storemyr

Most of you have heard about the famous, vast Old Kingdom Chephren’s Quarry in the far south of the Western Desert of Egypt. There are hundreds of quarry workings, which took advantage of clusters of big boulders in a flat desert, in total covering an area of almost 100 square kilometres. But there are also expanses of nothing but sand in between major workings. Except at one place, in the middle of nowhere. This is where “the loner” seems to have carried out his work, leaving one half-finished vessel blank, one almost intact hammerstone and one broken one. 5000 years ago.

The amazing thing about exploring the archaeology of now hyperarid desert landscapes is that you can walk within remains of human presence that look as if they were left a couple of days ago only. Little need to dig, even though the remains may be thousands of years old. Very different from archaeology in the woods.

We crisscrossed Chephren’s Quarry for days, recording, as far as I recall, close to one thousand single quarry workings (and associated archaeological features). The workings were all great, looking like small craters on the desert surface, since the original, big boulders had been excavated and cut up for production of vessels and sculpture, mainly in the Old Kingdom, leaving a ring of debris around the place where the boulder was once located. Though wonderful work, after a few hundreds of such recordings – click on your GPS, quick description, a snapshot or two – you get pretty blind. Especially when the temperature soars and the little water left is less than inviting. You simply need a cold beer!

Until you see the workplace of “the loner”. Big, empty sand flat, and nothing but this: one partially worked piece of blue gneiss, obviously intended for a vessel, one big hammerstone broken in two halves, and another, smaller hammerstone, rather intact, with clear marks of work. Very different from the remains of communal work of small groups of people that went on at the quarry workings in the surroundings.

Wow! The beer can wait! All members of the small recording team gathering, all taken aback on seeing this extraordinary little piece of nearly 5000 year-old archaeology amidst all the blinding things on that particular day.

Who was he? Why did he carry his piece of rock and his stone tools so far away from the others? Did he actually sit there carrying out his work, banging the gneiss, or did he walk away with his stones for working elsewhere? Did he get surprised by a sand storm? Did he manage to get back to the others? If not, where are his bones? Was he a loner? Did loners exist back then? Was it OK to be a loner? Or is the whole thing just evidence of recent looters that for some reason dropped the stones in the middle of nowhere? But why taking such “insignificant” stones when the surroundings boast with beautiful pieces?

All speculation, no answers. Nothing new in archaeology. But the loner made our day! Now it’s time for a cold beer!

This is how it more commonly looks like at Chephren’s Quarry. Photo: Per Storemyr

Both publications with numerous references to various works at Chephren’s Quarry. 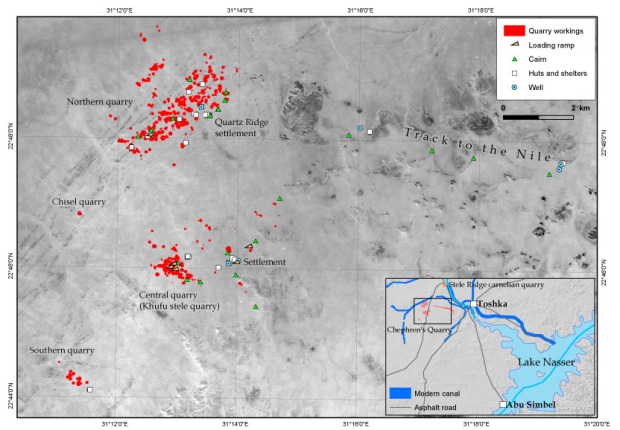 I work with the archaeology of old stone quarries, monuments and rock art. And try to figure out how they can be preserved. For us - and those after us. For the joy of old stone!
View all posts by Per Storemyr →
This entry was posted in Ancient Egypt, Archaeology, Old quarries and tagged Ancient Egypt, ancient egyptian quarries, Chephren's quarry, quarry, ten quarries of ancient egypt. Bookmark the permalink.