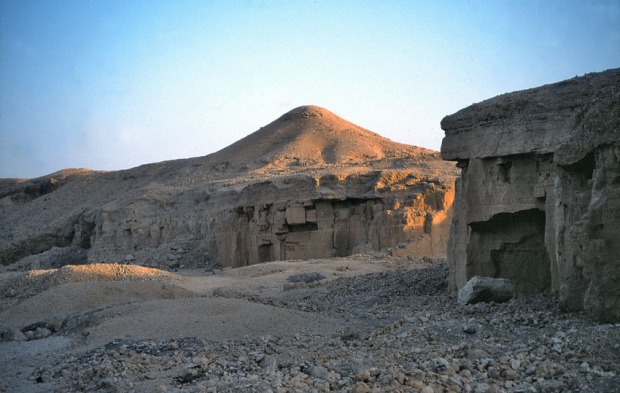 This is just the place where we bumped into the Wadi el-Muluk limestone quarry at sunset in the winter of 1999. Photo: Per Storemyr

It was my first trip to Egypt. In 1999, with Tom Heldal, I simply wanted to see as many old quarries as possible. We had several weeks at hand, meagre information on the location of quarries, and no idea of how to get to them. Also, security issues and permits were, back then, not part of our vocabulary. So we usually got a taxi and asked our way around. But in the Valley of the Kings at Luxor we could walk. On our way back from the tombs we recalled that there ought to be a quarry nearby. Off the road we went and 200 metres later we literally fell into one of the finest limestone quarries from the New Kingdom – a quarry full of lines and inscriptions made by red ochre. But why on earth were they painted in the quarry?

The Wadi el-Muluk (Valley of the King’s) quarry was in operation for some 150 years only, especially providing Hatshepsut’s nearby temple at Deir el-Bahri with limestone. Thus, as compared to other limestone quarries from Ancient Egypt, further north in the Nile Valley, Wadi el-Muluk is small. But it has wonderful quarry walls where carved inscriptions and extraction by bronze tools can be studied in detail.

For us, and most other people, it is the few shallow galleries where work went on underground that draw most attention, though. For on the gallery ceilings there are lines and hieratic inscriptions drawn by red ochre. Already famous Flinders Petrie speculated on the meaning of these inscriptions and basically came to the same conclusion as Japanese researchers did a hundred years later: the signs probably mark the development of quarrying, even in so high detail as down to single days. Perhaps it was a way in which the master could control his gang of quarrymen, possibly for reward purposes.

If this is the case it is one of many forerunners of the phenomenon of stone masons’ marks, which was particularly widespread in the European Middle Ages. Dressed and carved stones were often equipped with a unique sign of individual stone masons or group of masons. The marks would allow the master to follow their work and pay accordingly.

We didn’t know of the interpretation of the red lines and numbers as we bumped into the quarry in 1999. They were “mysterious” to us, and gave us the feeling of wanting to know more! So the Wadi el-Muluk quarry is definitely part of the reason why I apparently cannot get enough of old quarries…

Ceiling full of red lines in a gallery at the Wadi el-Muluk quarry, probably marking how the extraction of stone went on back in the New Kingdom. Photo: Per Storemyr

I once flew over Luxor and Thebes on a clear day… This is the location of the Wadi el-Muluk quarry (arrow). Photo: Per Storemyr

I work with the archaeology of old stone quarries, monuments and rock art. And try to figure out how they can be preserved. For us - and those after us. For the joy of old stone!
View all posts by Per Storemyr →
This entry was posted in Ancient Egypt, Archaeology, Old quarries and tagged Ancient Egypt, ancient egyptian quarries, inscriptions, Luxor, quarry, ten quarries of ancient egypt, Valley of the Kings, Wadi el-Muluk. Bookmark the permalink.