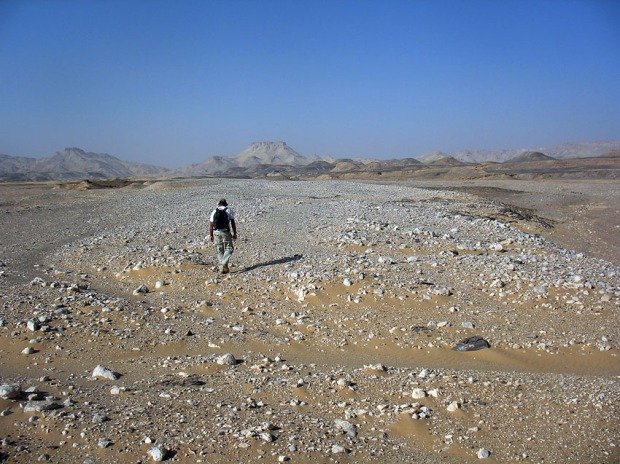 On the way to discovery of the first reported prehistoric grinding stone quarry in the Egyptian Sahara. Dirk Huyge walks the stony desert. Photo: Per Storemyr.

Some time ago I wrote about the discovery of a prehistoric grinding stone quarry in the Egyptian Sahara. Now the discovery is duly published! It was presented at the conference “Seen through a Millstone” in Bergen, Norway, in 2011. Recently, editor Lotte Selsing of the Archaeological Museum in Stavanger finalised the conference volume; an array of very interesting papers dealing with grinders and millstones across the world, from prehistory to the medieval period. Read on for abstract of my paper, get PDF and view a gallery of images.

Here’s the abstract of my paper:

“In 2007, the first reported grinding stone quarry in the interior of Egypt’s Western Desert was found at the north scarp of the Kharga depression. It can be tentatively dated to Holocene prehistory, within the moist phase that lasted from ca. 8,500 to 5,300 BC, or slightly later. In this period, the climate was humid enough to support foraging and pastoralist cultures and thus grinding stones were needed to process vegetable matter, perhaps also mineral pigments. The discovered quarry is small, yet thousands of relatively standardised, flattish and oval, lower grinding stones were produced from the silicified sandstone, in particular with the aid of flint hammerstones. Since the quarry is located beyond major Holocene prehistoric occupation sites, it is interpreted as having been exploited in an organised way, by groups of people that regularly visited the place, and possibly also created rock art close by.”

Reference and PDF of the full paper:

All papers in the volume “Seen through a Millstone” are open-access, and available at the website of Stavanger Archaeological Museum.

Previous blog posts about the discovery, and the millstone conference in Bergen:

The discovery was made on fieldwork with the North Kharga Oasis Survey (NKOS). This mission is still ongoing and directed by Salima Ikram and Corinna Rossi.

…and enjoy this little gallery of images from the grinding stone quarry at Kharga!

The grinding stone quarry by the north scarp: a work area lined with broken slabs. Scale is 15 cm long. Photo: Per Storemyr

On the way to discovery of the first reported prehistoric grinding stone quarry in the Egyptian Sahara. Dirk Huyge walks the stony desert. Photo: Per Storemyr.

Small area of silicified sandstone work (in the foreground) on the alluvial terrace. Photo: Per Storemyr. 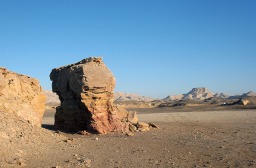 Split Rock – an area of ancient campsites and rock art along a major desert route (Darb Ain Amur) about three km south of the grinding stone quarry. Photo: Per Storemyr.

Location of the Kharga oasis and the grinding stone quarry (arrow). Map of Egypt modified from Wikimedia Commons http://commons.wikimedia.org/wiki/File:Egypt_Topography.png).

Map of the environs of the grinding stone quarry. North is up. Map: Per Storemyr.

Quarry 1, located on the little hill/plateau in the middle, upper part of the picture, as seen from broken-up slabs and blocks in Quarry 2. View towards the south. Photo: Per Storemyr.

A depot of flint hammerstones on the alluvial terrace with views south over the Kharga depression. Photo: Per Storemyr.

Satellite image showing important places mentioned in the text. This is a strongly tilted view, looking east, the scale only applicable to areas in the lower part of the image. Long arrow indicates the location of a main desert route, the Darb Ain Amur. Image modified from Google Earth.

I work with the archaeology of old stone quarries, monuments and rock art. And try to figure out how they can be preserved. For us - and those after us. For the joy of old stone!
View all posts by Per Storemyr →
This entry was posted in Ancient Egypt, Archaeology, New publications, Old quarries and tagged Ancient Egypt, ancient egyptian quarries, grinding stone, Kharga. Bookmark the permalink.