Was Nidaros Cathedral built from stone extracted in a large underground Medieval quarry? 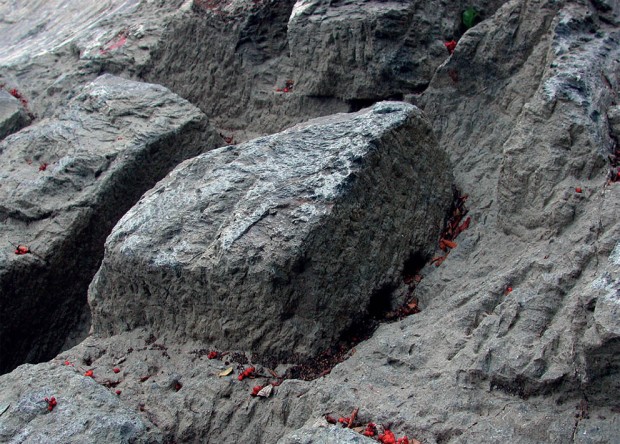 A carved-out, medieval soapstone block still attached to the bedrock. From excavations in the Bakkaunet quarry by Trondheim and Nidaros Cathedral, 2004. Photo by Per Storemyr

Ancient underground building stone quarries are rather common. They are known since at least the Old Kingdom in Egypt, some 6 500 years ago, when fine limestone was quarried underground close to Cairo (Tura) in order to provide casing stones to the Giza pyramids. But underground quarries are, interestingly, quite rare in the European Middle Ages. Apparently, there was no need to start difficult, large-scale underground operations to build churches, monasteries and cathedrals until the Late Middle Ages, when, for example, the underground limestone quarries in Paris and Caen in France started to become developed toward the gigantic network of tunnels and galleries we know today. Thus, it is remarkable that a large underground quarry may have been opened around AD 1200 in Trondheim, Norway, in order to provide soapstone for Nidaros Cathedral, the northernmost of Europe’s great medieval cathedrals. Why?

In a brand new paper Tom Heldal and I explore the possibility that the Bakkaunet soapstone quarry close to the city centre of present (and old) Trondheim, was indeed developed to a large underground quarry in the Middle Ages. We have not explored the possible adits and galleries, for they are inaccessible, like most of the open-cast parts of the quarry, for they have recently been destroyed by modern development.

But we have reconstructed old, written sources and we have made our calculations; of known output from the quarry as compared to the limits of the known open-cast activities and the size of the known waste heaps. In our view, there can be little doubt: Bakkaunet must have been operated mainly underground in the Middle Ages. Open-cast activities are simply too limited to account for the known output. Thus, we assume that at least 10 000 cubic metres of stone was extracted underground in the High Middle Ages, generally in the period from ca. 1200 to 1350.

10 000 cubic metres is a very large volume. It is, for example, a hall 10 m high, 10 m wide and 100 m long. We are not inclined to believe that such a gigantic hall exists; but rather several smaller halls and adits, where soapstone was extracted.

And it all makes sense. For soapstone was the only available freestone (for the carving of ashlar, decoration and sculpture) in the Trondheim Middle Ages. Soapstone was a very scarce resource, with only a few, small, open cast deposits exploited throughout the region. Moreover, we know, geologically, that the Bakkaunet deposit is larger underground than what can be seen on the surface.

Bakkaunet was not the only underground quarry in the Norwegian Middle Ages. Small underground soapstone and chlorite schist quarries were exploited already in the Late Iron Age (Viking Age) in Norway – for vessels, bakestone and other small items. Thus, the practice of underground exploitation was very well-known locally and regionally.

Underground exploitation was also known by the first English stone masons and quarrymen that arrived in Trondheim in the 11th century. They were key in building Nidaros, the largest cathedral up north: An “English” cathedral built with, perhaps, much more “underground stone” than the quarrymen were used to back home!

I work with the archaeology of old stone quarries, monuments and rock art. And try to figure out how they can be preserved. For us - and those after us. For the joy of old stone!
View all posts by Per Storemyr →
This entry was posted in Ancient Egypt, New publications, Norway, Old quarries and tagged ancient stone quarrying, Bakkaunet, Kleberstein, Nidaros Cathedral, Nidarosdomen, quarry, soapstone, Trondheim, underground quarry. Bookmark the permalink.

2 Responses to Was Nidaros Cathedral built from stone extracted in a large underground Medieval quarry?