Together with lead editor, professor Gitte Hansen at the University of Bergen, I have co-edited a brand new book: On the archaeology, geoarchaeology and craft of quarrying and use of soapstone in the North Atlantic region. Without Gitte, this adventure would never have ended! The book contains 17 papers by soapstone enthusiasts and sums up a research revival that has been ongoing for the last 20 years. Norway is a main focus, where soapstone has been used from the Mesolithic until today, but the book also contains papers on Greenland and the North Atlantic Isles by Danish and British colleagues. It gives brand new insights into many aspects of soapstone, especially on sourcing artefacts by combined geochemical and archaeological methods.

The book, with its more than 400 pages, has been published as an open-source publication in the UBAS-series; the University of Bergen Archaeological Series. From the back cover: 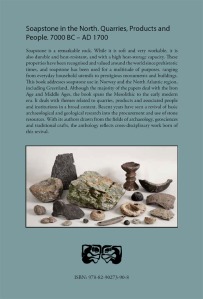 “Soapstone in the North” – back cover

“Soapstone is a remarkable rock. While it is soft and very workable, it is also durable and heat-resistant, and with a high heat-storage capacity. These properties have been recognised and valued around the world since prehistoric times, and soapstone has been used for a multitude of purposes, ranging from everyday household utensils to prestigious monuments and buildings. This book addresses soapstone use in Norway and the North Atlantic region, including Greenland. Although most papers deal with the Iron Age and Middle Ages, the book spans the Mesolithic to the early modern era. It deals with themes related to quarries, products and associated people and institutions in a broad context. Recent years have seen a revival of basic archaeological and geological research into the procurement and use of stone resources. With its authors drawn from the fields of archaeology, geosciences and traditional crafts, the anthology reflects cross-disciplinary work born of this revival.”

The book can be downloaded in full from the BORA platform:

…or you can take a look at individual chapters online:

We want to thank all involved in the book; first of all our authors! From the preface: 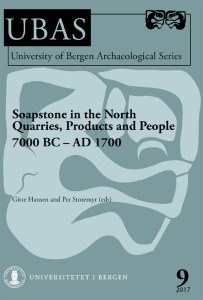 “Soapstone in the North” – front cover

“This book has been a long time in the making. It is an outcome of the five Norwegian University Museums’ joint research programme Forskning i Felleskap (FIF, 2010–2015), supported by the Research Council of Norway. FIF kindly facilitated a number of workshops and meetings between archaeologists, geologists and craftspeople, all with a common interest in premodern soapstone quarrying and use. The result is the chapters of this book, which are based on studies carried out over the last two decades and, for the most part, are published scientifically for the first time. We very much thank the authors for participating in this venture. We also thank several colleagues – archaeologists, geoscientists and craftspeople – that assisted the editors in peer-reviewing the chapters: Irene Baug, Birgitta Berglund, Laura Bunse, Poul Baltzer Heide, Richard Jones, Tor Grenne, Torbjørn Løland, Therese Nesset, Astrid J. Nyland, Lars Pilø, Kevin Smith, Lars F. Stenvik, Frans Arne Stylegard and Stephen Wickler; we are very grateful for the job you have done. Not least, thanks go to Tromsø University Museum, NTNU University Museum (Trondheim) and the University Museum of Bergen for their economic support in publishing the book.”

I work with the archaeology of old stone quarries, monuments and rock art. And try to figure out how they can be preserved. For us - and those after us. For the joy of old stone!
View all posts by Per Storemyr →
This entry was posted in Archaeology, New publications, Norway, Old quarries and tagged artefacts, Greenland, Iron Age, Kleberstein, Mesolithic, Middle Ages, North Atlantic, Norway, old quarries, provenance, soapstone. Bookmark the permalink.