Burning the beaches. Happy New Year from the Faroe Islands! 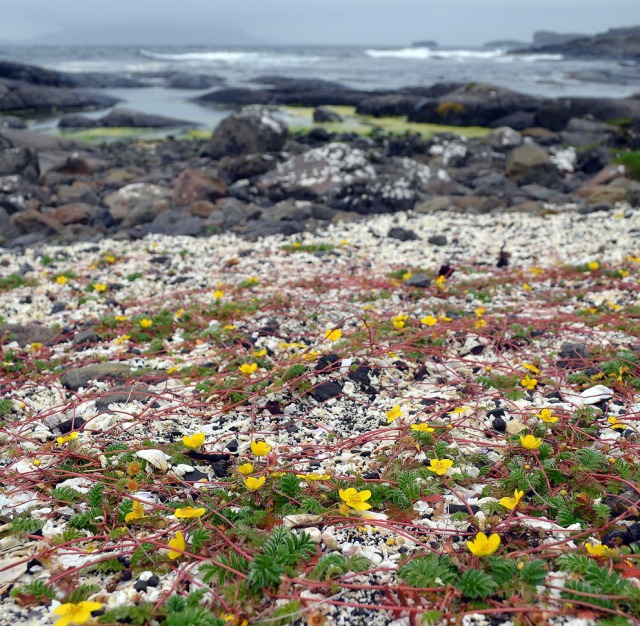 Hvitanes – “White Cape”. Just to the north of capital Torshavn at the Faroes. Grand sea shell beach deposits that were, presumably, used for lime burning already in the Middle Ages. Photo: Per Storemyr

The Faroe Islands, in the middle of the North Atlantic Ocean. Basalt and other volcanic stone everywhere! Yet, many buildings on the islands were erected by the use of lime mortar, from the Middle Ages on. There is absolutely no limestone on the Faroes. Thus, lime mortar had to be produced by “burning the beaches” – collecting shells from beach deposits, stacking the shells above a fire in a field kiln – and let it happen: Hold the temperature at some 900 degrees centigrade for a couple of days, and out comes quicklime to be mixed with water and beach sand for the mortar.

Sølve Johanson, a Swedish mortar expert, has analysed the mortars of the medieval cathedral at Kirkjubøur in depth (see his report here). He concluded that seashell beach deposits were used for making the mortars, indeed. Thus, people back then did not import limestone or burnt lime from Scotland, Norway or elsewhere; remember that the Faroes were part of the Norwegian Archbishopric in the Middle Ages. Making quicklime at the Faroes was an indigenous affair.

We know almost nothing of the technology of burning shells from beach deposits. But perhaps we can learn a few lessons from the lime works at Hvitanes (“White Cape”), just to the north of capital Torshavn, where the above photo was taken. Lime burning at this place was, apparently, ongoing until the early part of the 20th century – until the advent of imported Portland Cement to the Faroes, that replaced traditional lime.

There is work to be done! Digging historical archives, undertaking experiments! As a group of isolated islands in the North Atlantic Ocean, the Faroes are very important for understanding technologies of the Middle Ages.

Thanks to Símun V. Arge of the cultural heritage authorities, and Uni Árting of the Geological Survey of the Faroes, for guiding me through the heritage and geology of the islands in the summer of 2017. My work was part of the so-called Grubleseminar initiative.

I work with the archaeology of old stone quarries, monuments and rock art. And try to figure out how they can be preserved. For us - and those after us. For the joy of old stone!
View all posts by Per Storemyr →
This entry was posted in Archaeology, New projects, Old quarries and tagged Faroe islands, lime burning, lime mortar, limekiln. Bookmark the permalink.

5 Responses to Burning the beaches. Happy New Year from the Faroe Islands!