Typical game drive with trap formed as a funnel-shaped chute. From the Aswan region. Photo by Per Storemyr

A much awaited book, “The Gazelle’s Dream: Game Drives of the Old and New Worlds”, edited by Alison Betts and W. Paul van Pelt, was published a few months ago. The book is the first dealing with, on a global scale, the phenomenon of permanent hunting structures across prairies, steppes, deserts and tundras. Fourteen individual papers examine game drives from North America and Norway to Egypt and Yemen, with most examples derived from the desert expanses of the Middle East and Central Asia. My own contribution explores the ancient game drives of Lower Nubia in border country between Egypt and Sudan. Questions are: Who built these hundreds of kilometres of stone lines? How did they work? What animals were trapped? When were they built?

The game drives of Lower Nubia constitute a very substantial, but poorly known body of archaeology. Discovered in the 1960s, they are omnipresent at the western side of Lake Nasser, from Wadi Halfa to Aswan, with outliers situated by el-Hosh near Kom Ombo and in the Dunqul Oasis of the Western Desert.

Distribution of the game traps along a 400 km stretch of the Nile in Lower Nubia. Map by Per Storemyr

I surveyed many drives through several seasons of field walking 10-15 years ago, supplemented by extensive studies of high-resolution satellite imagery. The game traps come as long, and short, low stone lines broken by funnel-shaped openings called chutes. They constitute systems, which often block entire wadis and valleys over dozens of kilometres, indicating that substantial communal effort was invested in their construction. The lines were built to direct gazelles and perhaps other animals towards the chutes, where they were trapped with e.g. nets and cord, or killed by bow-and-arrow or spear.

Overall geometry of the systems are highly specific for Lower Nubia and different from the famous desert kites of Sinai, Jordan, Syria and other regions of the Middle East. They seem to have been developed to take advantage of the particulars of movement when animals returned to the desert plains and hills after grazing and drinking by the Nile. The game drives are not mass-killing systems on a scale like desert kites; nevertheless, they once must have been ecologically and culturally well-adapted and efficient trapping systems. 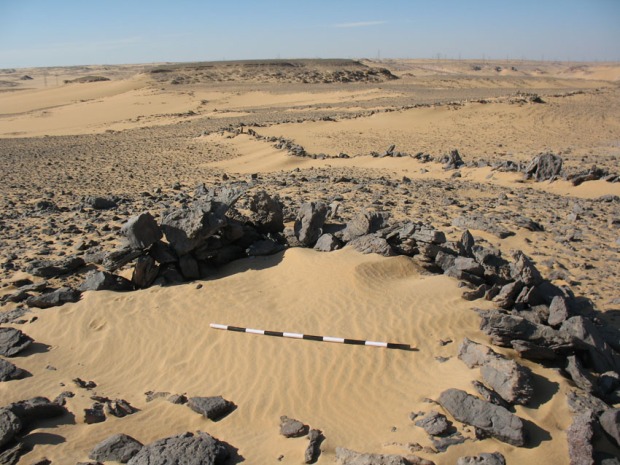 Game drive with associated lookout in the Aswan region. Photo by Per Storemyr

The game drives have not been dated scientifically, but earlier inferences range from the Late Palaeolithic (c. 21 000-11 000 BCE) via the Middle Nubian (c. 2400-1550 BCE) to the Roman period. Until proven false by further studies, I believe that the game drives were developed in response to the wetter climate during the so-called Epipalaeolithic period (c. 7000-5000 BCE) in the region, roughly corresponding to parts of the Nubian Neolithic. However, it is also likely that the systems were in use, repaired and altered to fit smaller animal populations, in later and drier periods.

With my contribution, I hope to draw attention to this fine and substantial body of archaeology, so that more research can be undertaken on dating, function and cultural significance before it is too late. As with other archaeological sites, many game drives were submerged by Lake Nasser in the 1960s and many are today in danger of destruction by modern development, especially in the Aswan region.

Please read my paper, with lots of detail on construction, associated archaeological sites, animal behaviour and function, as well as discussions on dating and cultural affinity:

The whole book is available with Sydney University Press, as e-book and paper version:

I work with the archaeology of old stone quarries, monuments and rock art. And try to figure out how they can be preserved. For us - and those after us. For the joy of old stone!
View all posts by Per Storemyr →
This entry was posted in Ancient Egypt, Archaeology, New publications and tagged Ancient Egypt, Ancient Nubia, game drives, gazelle, hunting, Lower Nubia. Bookmark the permalink.