Making medieval stone architecture: the use of slate in Central Norway 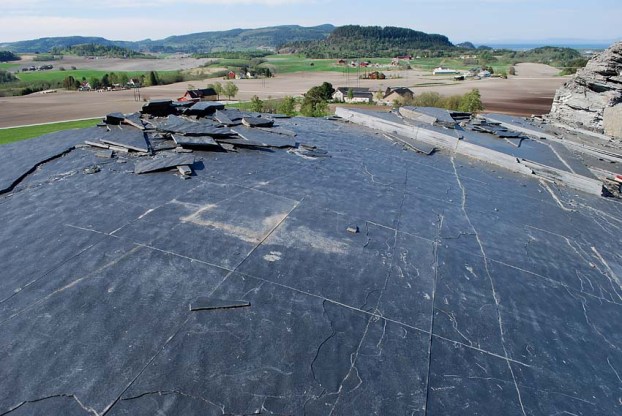 The black phyllite schist quarry called “Sorte Skifer” at Stjørdal in Central Norway. It may have a tradition for procurement of slate back to the Middle Ages. Photo: Per Storemyr

The use of slate has traditions back to the Neolithic in Norway. Stone that were easy to split could be used for anything from the erection of fine burial chambers to the production of knives – phenomena that have been well documented by numerous archaeological excavations. It is much more difficult to say anything sensible about the medieval use of slate in the country. There is, for instance, only one historic reference to slate as roofing material at medieval buildings. This document, written by Bishop Arne in 1308, concerns King Haakon’s Hall in Bergen, built from the middle of the 13th century onward. The building was apparently roofed with fine slate from the famous quarries at Jondal in Hardanger, which are still in operation. However, recent observations in the Trondheim region indicate that slate for roofing – and masonry construction – may have been more widespread, and that the use of slate as a building material for medieval architecture goes back to around 1100.

So, what is the evidence? As for roofing, there are only indirect indications since medieval buildings have been hit by numerous fires – there are simply no old roofs left today! But slate and associated stone were clearly used for floors, vaults and other building purposes in the 12th century and especially in the Gothic period from 1200 onwards. Key is the occurrence of slate as pinning stone in joints of fine ashlar masonry. Was the pinning a by-product of the quarrying of roofing slate?

The slate floor at Nidarholm Abbey in Trondheim 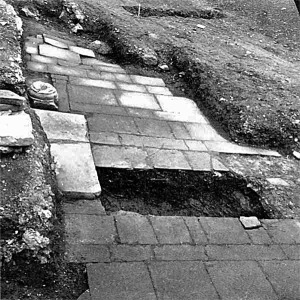 As described in a previous blog post, the earliest, hard evidence of the use of slate at medieval buildings in Central Norway is the spectacular slate floor at Nidarholm Abbey, situated on a tiny island not far from the city of Trondheim. The floor is now covered up, but former archaeological excavations have placed it at about 1100, as confirmed by the excavators Øivind Lunde and Chris McLees, as well as medieval building archaeologist Øystein Ekroll.

On the basis of petrographic studies, Tom Heldal of the Geological Survey of Norway has recently suggested that the slate in question originates at the so-called Almlia quarries, right by the Trondheim Fjord, about 30 km west of Nidarholm. This quarry produced thick slabs of quartzite slate for the streets and staircases of early modern Trondheim, particularly in the late 19th century, but probably also slightly earlier (18th century). Thus, contrary to previous knowledge, the quarry may have a history back to the very beginning of stone architecture in Norway. As we all know, European stone architecture was introduced very late in Norway – together with Christianity around the 11th century – as the Vikings slowly gave up their belief in “paganism”. 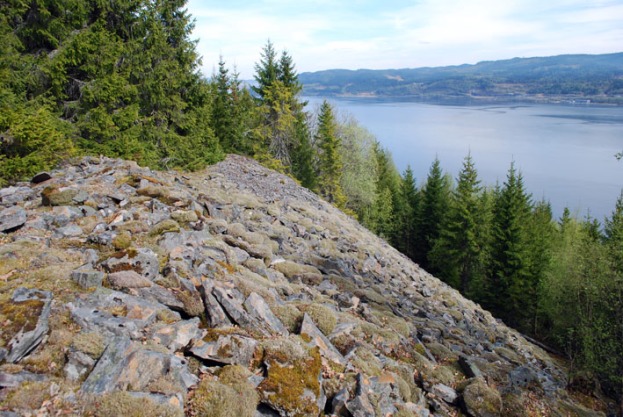 The Almlia quartzite slate quarries about 30 km west of Trondheim. The picture shows one of the great spoil heaps from early-modern production. Photo: Per Storemyr

There is no light-weight limestone in Central Norway and small-scale brick production may only have commenced at some stage in the middle-late 13th century. Thus, vaults at medieval buildings had to be constructed mainly from stone slabs set “vertically”. The most beautiful vaults constructed in this fashion are the 13th century metamorphic sandstone slab vaults in the so-called “West House” at the north wing of the Archbishop’s Palace by Nidaros Cathedral in Trondheim city. However, preserved medieval vaults made from the same stone reach back to the Romanesque – to c. 1160 at Nidaros Cathedral. These vaults are made by the same type of stone that was used to build Værnes church in Stjørdal, 35 km east of Trondheim, in the early-middle 12th century.

Gothic slab vault at the West House of the Archbishop’s Palace in Trondheim. The vault was made around 1250 with a combination of sandstone and slate, probably from the Stjørdal district, some 30-35 km est of the city. Photo: Per Storemyr 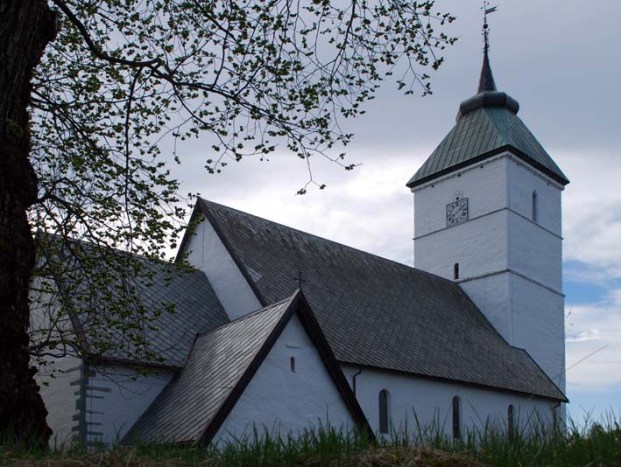 Værnes church in Stjørdal, begun in the first half of the12th century. The slate roofs are modern, but a testimony to the roofing slate traditions in the district. Photo: Per Storemyr 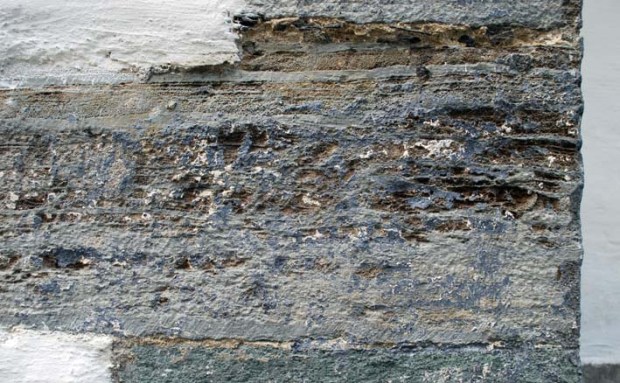 This sandstone (or greywacke) was used to build Værnes church in the Middle Ages. Geologically, it occurs togehter with roofing slate. Layers with high carbonate contect tend to weather the most. Ashlar from Værnes church. Photo: Per Storemyr

The stone in question is an easy-to-split, Ordovician carbonate-rich metamorphic sandstone (or greywacke), which is intimately connected with deposits of fine phyllite schist – a great slate that was extremely popular for local and regional roofing from the 19th century and until recently. There are loads of such early-modern slate quarries, both in the Stjørdal district, east of Trondheim and in Klæbu to the south of the city. Following historical sources, the late Trygve Lysaker has shown that the history of the slate quarries reach back at least 300 years. This is because parts of Nidaros Cathedral were provided with roofs of slate from Klæbu in the late 17th century. This phyllite slate substituted previous roofs made from wood and lead constructed after late-medieval fires that destroyed all hard evidence of what the 12th and 13th century roofs were made from.

The intimate connection between sandstone and phyllite schist, the use of the sandstone as early as the 12th century and the long phyllite schist traditions for early-modern slate roofing suggest that all of these stones were well-known in the Middle Ages. Thus, it is reasonable to maintain that the phyllite may even have been used for roofing at a very early stage.

That the phyllite schist of the Trondheim region was an important stone in the Middle Ages can also be deduced from studies of medieval masonry at Nidaros Cathedral and St. Mary’s church in Trondheim. Especially in the Gothic period, from about 1200, both of these churches got wonderful ashlar masonry with very thin joints (thickness generally about 5 mm). This was the European fashion of the time; the thinner the joints the better! In Trondheim the ashlars were made from regional soapstone and the joints were filled with locally-made lime mortar. But many joints were provided with thin pieces of black slate, so-called pinning stone. We don’t know exactly why the medieval builders used thin slate in the joints, but presumably it may have been connected with levelling purposes, i.e. to obtain very thin joints, and the wish to reduce lime mortar consumption, as well as with aspects of general masonry stability.

Pinning stone of black slate, probably from Stjørdal, gazing out of the thin joints of weathered, Gothic soapstone ashlar masonry at the nave of Nidaros Cathedral. Photo: Per Storemyr

Another view of pinning stone of black slate in the joints of Gothic masonry at Nidaros Cathedral. The joint is about 5 mm wide. Photo: Per Storemyr

Anyway, the use of thin slate in the Gothic joints at Nidaros Cathedral is extremely widespread and always connected with the same stone: a black phyllite schist, of which the nearest, known occurrence is the quarries of “Sorte skifer” (“Black slate”) at Stjørdal, 35 km east of Trondheim by the sea route. These quarries were in operation in the 19th century and they are still active; producing slate for modern roofs, floors and walls. They even produced slate for the floors of Nidaros Cathedral during the restorations in late 19th century. And the slate is intimately connected with just the same sandstone that was used for vaulting and masonry in the Middle Ages. In fact, it is possible to obtain good sandstone for masonry/vaults and phyllite slate for roofs, floors and pinning at the very same location. 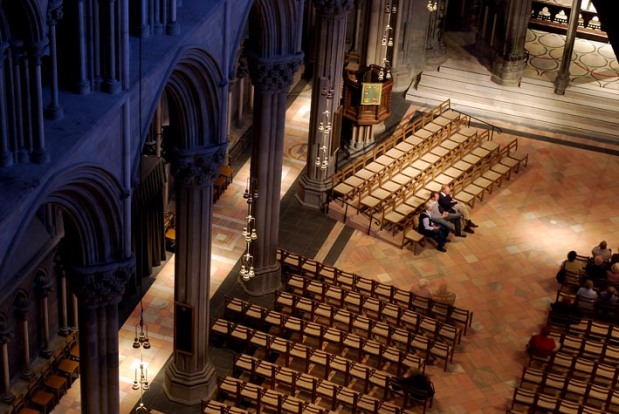 Restored floor of the choir at Nidaros Cathedral. The black slate between the pillars was provided from “Sorte Skifer” in the late 19th century, whereas the reddish stone is the famous marble from the Fauske quarries in Northern Norway. Photo: Per Storemyr

There can be little doubt that “Sorte Skifer”, or a nearby, similar quarry, is the source of the pinning stone in the Gothic masonry at Nidaros Cathedral, but also at St. Mary’s church in Trondheim. The latter was additionally provided with thin slate of a stone called amphibolite as pinning stone – a stone which provenance is still somewhat obscure.

By-product or quarrying for a purpose? The pinning stone quarry at Selja Abbey

The big question is, of course, whether the pinning stone was procured with the sole aim of using it in the joints, or whether its quarrying and use was a kind of side-effect; thin slate pieces as a by-product of larger slabs intended for roofs and floors. While I tend to support the “by-product hypothesis”, there is a recent archaeological find that may sustain the idea of quarrying of slate for the specific purpose of using it as pinning stone.

The archaeological find in question was made by myself in 2010 while working at one of the earliest medieval abbeys in Norway, Selja Abbey, off the cost of the westernmost part of the country. The masonry at the abbey and its church is made from rubble and ragstone of the local gneiss – thus a masonry that required substantial amounts of smaller stone for filling the joints. But also ashlar masonry was made using flat stone in the joints, probably even as early as 1100. Such stone for filling – pinning stone – were undoubtedly provided from a small, local quarry that I discovered near the abbey. This quarry produced small pieces of pinning stone from strongly foliated gneiss; there is no evidence whatsoever that roofing slate or slabs for floors were among the products from the site. And the main stone for the masonry were brought from other types of gneiss quarries that I found near the abbey.

Medieval pinning stone quarry near Selja Abbey. The foliated gneiss in the foreground provided the raw material, whereas working the gneiss to good pinning stone took place at the flat area in the background. Photo: Per Storemyr

A quarry centre for sandstone and slate in medieval Central Norway

Though the pinning stone quarry at Selja is unique, it cannot be disregarded as a possible representative of unknown, similar quarries used specifically for pinning stone in medieval Norway. However, looking to Central Norway and the known use of sandstone and phyllite from occurrences that contain both types of stone, it is just as likely that the medieval builders were drawn to the use of phyllite for pinning stone while exploiting this stone for roofing slabs and flooring, as well as the associated sandstone for masonry and vaults. If this is the case, we may suggest that that there was a substantial quarry centre for such stones near the city of Trondheim in the Middle Ages, probably situated at or near the current “Sorte Skifer” quarry in Stjørdal. This would, in fact, in a very good way explain why the Stjørdal district became such a great quarry centre for roofing slate and masonry in the early-modern and modern periods. Quarry centres usually have long, often rather obscure histories!

And if this hypothesis is all wrong, we still know that slate was used for floors in the medieval Trondheim region, even as far back as 1100, when the Almlia quarries quite likely provided stone for the floor at Nidarholm Abbey.

Sources (that are not linked to in the text)

I work with the archaeology of old stone quarries, monuments and rock art. And try to figure out how they can be preserved. For us - and those after us. For the joy of old stone!
View all posts by Per Storemyr →
This entry was posted in Archaeology, Norway, Old quarries and tagged Middle Ages, Nidaros Cathedral, Nidarosdomen, Nidarosdomen artikkelserie, Norway, quarry, slate, Trondheim. Bookmark the permalink.

4 Responses to Making medieval stone architecture: the use of slate in Central Norway