Happy New Year! With a cavalcade of images from 2015

The rock art at Alta never ceases to fascinate! Here from the Kåfjord site in the fall of 2015. I’m very grateful that I’ve been able to work with the good people at The World Heritage Rock Art Centre – Alta Museum for some years now. Photo by Per Storemyr

I wish to thank my clients, partners, colleagues and followers of my website for a fine year! The very best to you all for 2016! With a cavalcade of images, I would like to sum up a few 2015 events. First of all, I was finally able to finish my book on the history of stone quarries, which was published jointly by The Restoration Workshop of Nidaros Cathedral and the Geological Survey of Norway. But my work took me to many parts of Norway, from a Mesolithic quartz quarry near Arendal, deep down south, to the fascinating rock art at Alta, far in the north. Though I was not able to visit Egypt in 2015, I’m still publishing papers on the geoarchaeology of quarries in the desert landscape, together with good colleagues.

This is my contemporary home, at Hyllestad in Western Norway. From just this place thousands of millstones were exported to Europe in the Viking Age and the Middle Ages. A spring tide has left the modern quay unrecognisable… Thanks to the Norwegian Millstone Centre and the Foundation for the Museums in Sogn og Fjordane County, where I work part-time as associate professor. Photo from our living room (!) by Per Storemyr

Since 2011 I’ve been working on a book on the history of stone quarries. Nidaros cathedral, the northernmost of Europe’s great medieval cathedrals forms the key case study. Historic picture from its most important modern quarry – Bjørnå in Nordland County – after a very troublesome rock fall in the 1920s. Many thanks to The Restoration Workshop (NDR) and The Geological Survey of Norway for publishing the book in 2015. (See under “Publications” at my website.) Photo by NDR

This was like coming home to my childhood forests! Archaeological investigations at the Sagene Mesolithic occupation site, part of the work undertaken prior to the building of a new, major highway (E18) between Arendal and Tvedestrand. My task was to investigate a Stone Age quartz quarry at a neighbouring site (Kvastad). Thanks to the Museum of Cultural History at the University of Oslo for taking me onboard! Photo by Per Storemyr. 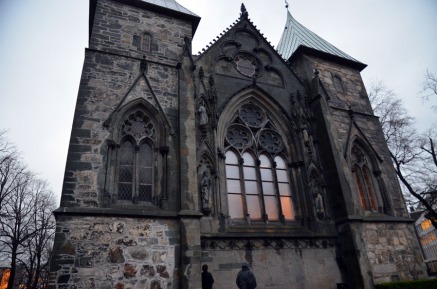 Stavanger Cathedral will be restored over the next 10 years. Thanks a lot to Stavanger municipality and the Archaeological Museum at the University of Stavanger for taking me onboard in the planning phase! Photo of the east front of the cathedral by Per Storemyr

A medieval grave slab in marble from Værnes church, Central Norway. Værnes was built in the 12th century, as one of the key stone churches up north. Very fortunately, I can carry on studies on the building stones of this church – thanks to my involvement with an interdisciplinary group of researchers keen on the Middle Ages – the “Grubleseminar” group. Photo by Per Storemyr

Together with my good colleague Jim Harrell I published a major paper on Ancient Egyptian quarries last year, “Limestone and sandstone quarrying in Ancient Egypt: tools, methods and analogues” (see under “Publications” at my website). It was an important paper for me, since I was forced to review what we know about quarrying of limestone and sandstone in the Pharaonic period. Photo from Aswan by Per Storemyr

The rock art at Alta never ceases to fascinate! Here from the Kåfjord site in the fall of 2015. I’m very grateful that I’ve been able to work with the good people at The World Heritage Rock Art Centre – Alta Museum for some years now. Photo by Per Storemyr

There is at least one great thing about living in Western Norway: The coastal express boat! It is the best way of travelling from one job to another. I have made numerous trips up and down the magnificent coastline, here at Frøysjøen between Florø and Måløy – with Devonian sandstones and conglomerates in the background, and very close to the grand rock art site at Vingen. Photo by Per Storemyr

Another major work that was finished in 2015: On the stone quarries that was used for building medieval monasteries in Norway. More information is forthcoming on my website (but see also under “Publications” at my website). Working with the Norwegian Directorate for Cultural Heritage has been just great! Image from a 2015 seminar at Selja monastery at the westernmost tip of Norway. Photo by Per Storemyr

I work with the archaeology of old stone quarries, monuments and rock art. And try to figure out how they can be preserved. For us - and those after us. For the joy of old stone!
View all posts by Per Storemyr →
This entry was posted in Ancient Egypt, Archaeology, Monument conservation, Norway, Old quarries, Rock art, Ruins and tagged cavalcade 2015. Bookmark the permalink.