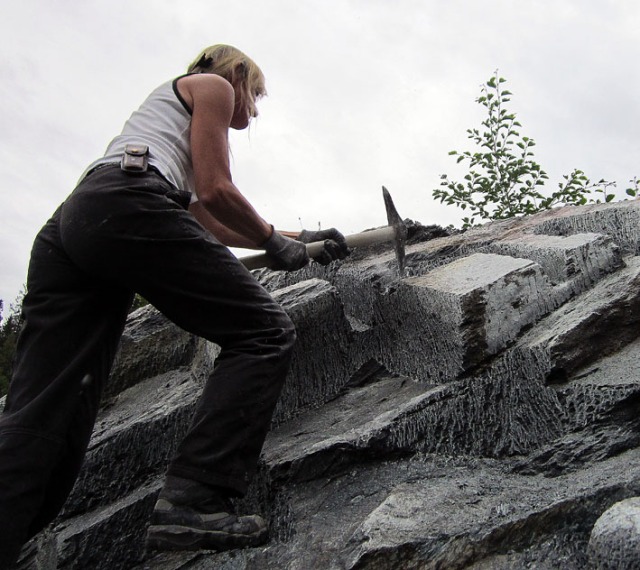 Experimental archaeology in old building stone quarries is a rare activity. But not so for Norwegian stone carver Eva Stavsøien. She asked herself how soapstone was extracted in the Middle Ages. Bringing handmade pickaxes, she went to an abandoned quarry to find out. The work? Not as hard as we often tend to think about traditional quarrying. Read and watch video!

Eva works with the Restoration Workshop of Nidaros Cathedral in Trondheim and knows how to carve and dress soft soapstone, the key building stone at the cathedral. A few years ago she tested extraction of soapstone cooking vessels, the way it was done during the Viking and Middle Ages in Norway (and worldwide): by carving a roughly circular trench (or channel) around the desired pot and loosening it from the bedrock with a chisel or wedge. Experience and inspiration were collected, leading to the bigger experiment – in the summer of 2011 – along the same line as vessel extraction: Copying medieval quarrying of soapstone for building purposes, as we know it from investigations in several Norwegian quarries.

She asked the blacksmiths at the Workshop to help in producing copies of medieval pickaxes. Then she got permission from the heritage authorities to carry out her experiment in the abandoned, protected Klungen quarry close to Trondheim. This quarry provided stone for Nidaros Cathedral both in the Middle Ages and the late 19th century, and some 10 years ago we carried out a major archaeological excavation to document the past, and to investigate the potential for further stone quarrying (see references below).

Problems with cracks and fissures

Extracting stone at Klungen with modern methods (drilling, wire sawing) turned out to be a catastrophe – a total failure; the stone simply had too many fissures and cracks, a very common problem in soapstone deposits. And so it was impossible to produce blocks for further reduction to ashlars and sculpture.

In fact, a similar problem was met by the quarrymen more than a century ago. But as they resorted to “old methods”, basically carving out the stone from the bedrock, they were able to produce stone almost as good as in the Middle Ages.

The secret is that it may be easier to control the quality of the desired blocks using manual methods. And in using such “slow” methods, the internal rock stress (common in all rocks) may be released in a gentle way, leading to less cracks and fissures as compared to employing “fast” methods. But there is a problem: Using manual methods is hard work – just the kind of work that the modern stone industry has abandoned in favour of machines.

But how “hard” and time-consuming is it really to carve out blocks? Eva selected her place in the old quarry and began carving out trenches around desired blocks the size of small ashlars, working perpendicular to the foliation (planes of schistosity). Her pickaxes were light and easy to handle; and she reduced effort by carving thin parallel grooves along the sides of the trench, knocking off the middle part as she went downwards.

Video of Eva’s experiment, by Øystein Aarlott Digre, Trondheim, with big thanks!

When her quarry layout was in place and the work went in a rhythmic way, she was able to produce a block, almost a finished ashlar, in about two hours, easily wedging it out along the bottom foliation plane. With more training and optimal quarry layout, the time needed would probably be much less…

The finished stones unfortunately had fissures; this can not only be explained by the difficult stone, but also by the fact that the experiment took place at the very surface of the deposit (more cracks than further down), and close to an area that had been severely affected by previous, unsuccessful modern quarrying.

Though in Eva’s case the quality of the stone hampered the production of sound blocks, the more important result is the efficiency of the carving. It can be done with lightweight tools, is not as troublesome as our modern minds tend to think about it – and it produces little waste. After all: historically it has been the most common way of producing stone from soft deposits; sandstone, many limestones – and soapstone. Hard stone was extracted in many different ways, with “plug and feather” a very common one.

Making trenches was the method right from the beginning of stone architecture in Ancient Egypt 5000 years ago, when copper chisels, perhaps also flint tools, were used for carving out huge limestone blocks to pyramid construction. It was used by the Greeks and Romans for extracting marble with both light and heavy iron picks. Globally, sandstone was quarried this way until modern times, before drilling and later wire sawing took over. And in Norway the method was in use well into the 20th century for making blocks for soapstone fire places. Our entire culture is built on carving out stone blocks for architecture! So how could it have been inefficient?

Abandoned, carved out block in the New Kingdom quarry at Qurna, just by the Valley of the Kings in Luxor/Thebes. Note the scale!

On ancient quarrying with a view to trenches and pickaxes:

And please see the website of Guedelon – A castle in the making, the greatest experimental archaeology project in the world, including stone quarrying, which is mainly carried out by the use of wedges.

I work with the archaeology of old stone quarries, monuments and rock art. And try to figure out how they can be preserved. For us - and those after us. For the joy of old stone!
View all posts by Per Storemyr →
This entry was posted in Archaeology, Norway, Old quarries and tagged experimental archaeology, Nidaros Cathedral, Nidarosdomen, Norway, quarry, soapstone, Trondheim. Bookmark the permalink.