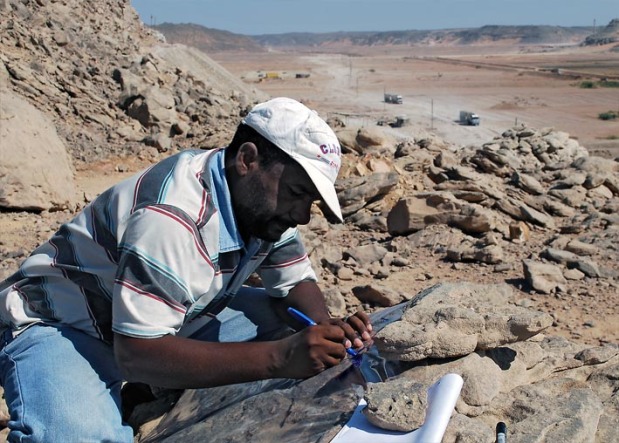 Emergency in Wadi Abu Subeira: Adel Kamel of the Supreme Council of Antiquities in Aswan recording Late Palaeolithic rock art. In the background: Heavy trucks transporting clay from the numerous mines in the wadi. The clay is used in the Egyptian ceramics industry. Photo: Per Storemyr

In 2006 one of the most important recent archaeological discoveries in Egypt were made in Wadi (Chor) Abu Subeira near Aswan: A team led by Adel Kelany of the Supreme Council of Antiquities (SCA) found a stunning assemblage of petroglyphs dating to the Late Palaeolithic era (c. 15-20.000 years ago). Ongoing surveys have shown that the initial find was the tip of the iceberg only, which makes Subeira perhaps the richest place of “Ice-Age” art in North Africa, comparable to the site of Qurta, 50 km to the north. Unfortunately, the Subeira rock art is extremely threatened by modern mining, which lately has proven to be even more widespread than previously thought: A truly unique testimony of mankind’s early art is now on the verge of destruction.

15-20.000 years ago the waters of the Nile were much higher than today. The broad Wadi Abu Subeira may have been a small “fjord”, reaching several kilometres into the Eastern Desert: A great habitat for wildlife in the otherwise hyperarid environment and a great place for humans to stay – to fish and hunt – and to access the interior of the desert and perhaps the Red Sea. 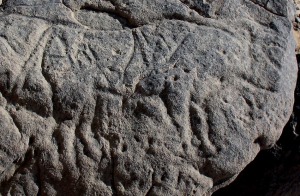 It seems that it was along this “fjord” that the Late Palaeolithic humans made their art. They pecked many aurochs (wild ox), hartebeest, fish, hippopotami and even a very large, beautifully executed Nubian ibex, which publication is forthcoming. Over the millennia erosion along the slopes of the wadi has probably destroyed many pictures, and most are now found on boulders and slabs. However, some are still in-situ, implying that it is possible to reconstruct site distribution.

The rock art is comparable to the better-known occurrences at Qurta by Kom Ombo, where Dirk Huyge and his Belgian team has recently confirmed the age of this type of rock art: It is definitely belonging to the Late Palaeolithic era, and thus comparable to the great “Ice-Age” art in Europe – especially in the Late Magdalenian period. It is yet entirely unclear whether there is a relationship in terms of long-distance influence and intercultural contact, but, according to Huyge, the Egyptian occurrences clearly “introduce a new set of challenges to archaeological thought”.

This is why it is so important to safeguard the Wadi Abu Subeira rock art and the associated archaeological sites for the future – otherwise we will lose an important place that may help us finding out whether there was in fact contact between North Africa and Europe in the Late Palaeolithic.

The mineral wealth – the threats

Wadi Abu Subeira was not only a place to fish and hunt and make rock art – it was also a place of great mineral wealth for ancient peoples. The slopes of the wadi feature massive amounts of silicified sandstone (quartzite), which was used for making tools as far back as the Early Palaeolithic. The stone was superior for making grinders, an activity that may have started in the Late Palaeolithic, which saw the small beginnings of “protoagriculture” – the systematic collection and processing of wild plants. For this grinding stone was needed! 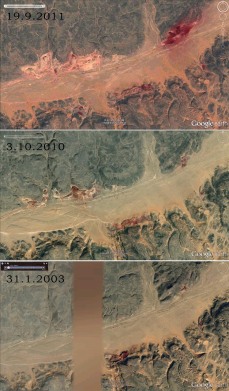 Also, like the rest of the Aswan region, Wadi Abu Subeira is very rich in iron ore – hematite and ochre. When ground to pigment, Palaeolithic (and later) humans made heavy use of the wonderful red colour, such as for body painting. It is thus very likely that the Subeira hematite and ochre deposits were exploited already in the Palaeolithic.

A great gift for ancient man, hematite and ochre is the curse for Adel Kelany and his archaeological team attempting to survey and protect the rich archaeology of Wadi Abu Subeira. For there is still a big need for red pigments, and hematite and ochre can, of course, be made into steel! Lately, the iron mining in the wadi has greatly intensified, seemingly after new concessions were given to various companies by the Egyptian mining authorities (see map above). The new concessions are so extensive that they may effectively wipe out nearly all archaeology from the wadi – as if the wadi was not threatened enough from other mining activities!

For, until recently, the greatest risk was related to widespread clay mining for the Egyptian ceramics industry. However, since the clay is occurring in thin layers only, most of the work was undertaken as underground mining, following these thin layers. This mode of mining caused some destruction by the mine openings, but did not wipe out everything nearby. 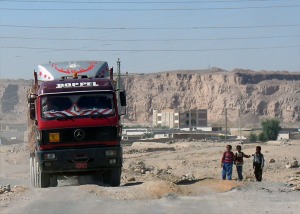 Adel Kelany and his team has until recently been able to deal with the clay mining companies, working together with them to ensure as little destruction of archaeology as possible. Many archaeological sites are also guarded by SCA-personnel and some are fenced off – all to avoid both mining attempts and robbery. As we all know, in the wake of the Egyptian revolution last year, robbery at archaeological sites has skyrocketed because of the security vacuum that developed, and which still is a big problem.

But it is more difficult to deal with large-scale iron mine concessions, though Kelany and his SCA team is in constant dialogue with the companies and various authorities to show them the locations of the archaeological sites, trying to persuade them to stop – or not start – working in the vicinity of such sites. They have the strong Egyptian antiquities law behind them, but in view of economic interests it is hugely difficult to enforce the law – not only in Egypt!

At the moment we can only hope that Adel Kelany and SCA will be successful in their protection attempts, offering them the moral and other support they may need. But these are very difficult times in Egypt, with administration and political organisation in a relatively chaotic state, and presidential elections soon coming up. As more information about the situation appears, I will keep watching it at this website. Fingers crossed for one of the most significant archaeological sites in Egypt.

Article written with the aid of Adel Kelany and Dirk Huyge. 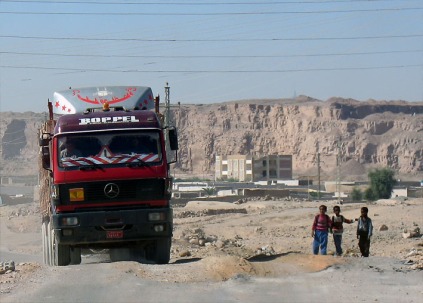 A superbly made Late Palaeolithic auroch. Photo: Per Storemyr

Another auroch! Photo: Per Storemyr 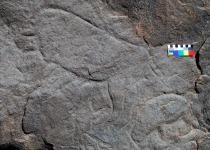 Part of a hippo among the boulders in Subeira. Photo: Per Storemyr

A hartebeest. Photo: Per Storemyr 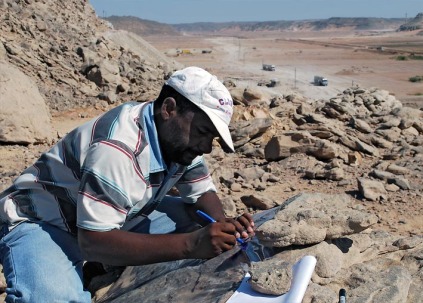 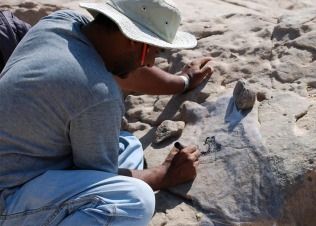 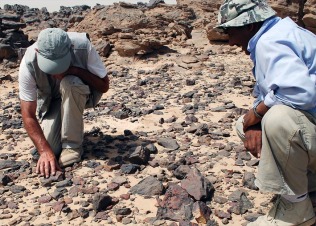 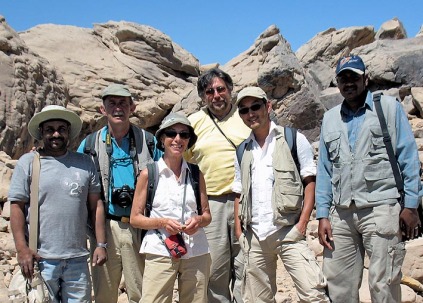 With Paul Bahn (back, middle) in Subeira. Photo: Lauren Lipiello

Adel Kelany with pottery found in Subeira: Photo: Per Storemyr 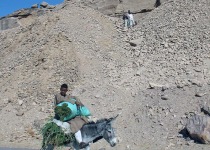 Recording rock art almost destroyed by modern quarrying while life goes on below. Photo: Per Storemyr

It’s hot at Subeira! Also for the local site guard. Photo: Per Storemyr

A site visit on a very hot day. Photo: Per Storemyr 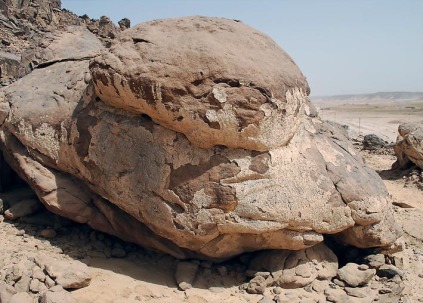 Calcite deposits (white) high up in the wadi slope; evidence for a higher NIle at the end of the Palaeolithic. Photo: Per Storemyr 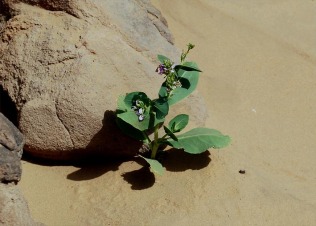 Subeira: One of the driest place on earth, but life goes on. Photo: Per Storemyr 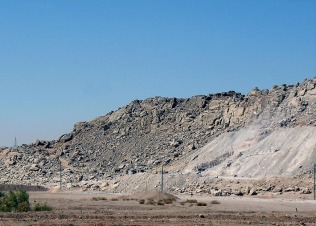 A clay mine – and the Palaeolithic rock art is just around the corner. Photo: Per Storemyr 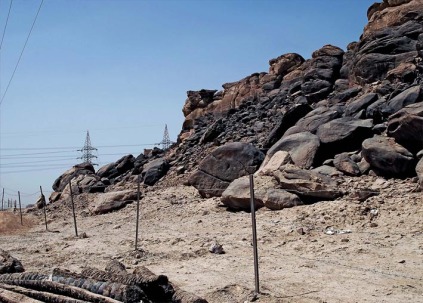 A fence to keep intruders away from Subeira site CAS-6, which is also guarded. Photo: Per Storemyr 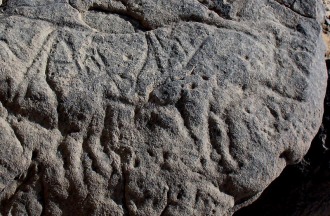 This superbly made auroch is part of the Late Palaeolithic rock art in Subeira. Photo: Per Storemyr 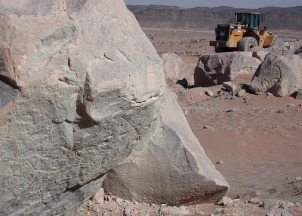 Heavy machinery is never far away from rock art in Subeira. Here a location of Predynastic petroglyphs. Photo: Adel Kelany 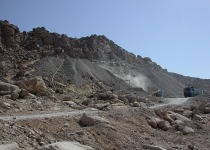 Adel Kamel trying to figure out the nature of the modern mining. Photo: Adel Kelany

The adits of a modern clay mine in Subeira. Photo: Adel Kelany

I work with the archaeology of old stone quarries, monuments and rock art. And try to figure out how they can be preserved. For us - and those after us. For the joy of old stone!
View all posts by Per Storemyr →
This entry was posted in Ancient Egypt, Archaeology, Heritage destruction, Rock art and tagged Ancient Egypt, Aswan, Qurta, rock art, Wadi Abu Subeira. Bookmark the permalink.