Would you have liked to live here, at Kropfenstein medieval cave castle?

Switzerland is renowned for its castles and castle ruins, remnants of the feudal Middle Ages. A time when we may not have wanted to live! At least not as common people. But sometimes we may question whether life was much better for the nobility, for society’s elite. Take a look at the remains of Kropfenstein castle, pinned to a vertical cliff in Surselva (Grisons), difficult to access, away from the nearest village. Great place for a special holiday, you might think – but would you have liked to reside here, year in, year out?

I work with the past and ought to know better. Still I sometimes find myself glorifying and romanticising the Middle Ages or Ancient Egypt or the past in general, whenever, wherever. It’s so easy to get carried away with grand Gothic cathedrals, the innovative way they’re built, the logistics of material procurement, even traces of work in the stone quarries testifying to superb craftsmanship. Or the art of the past in general. Or the wonderful, simple life of farmers, wherever, whenever.

But life in the Middle Ages was mostly a far cry from glorious and romantic. When I need a reminder I walk to the ruin of the Kropfenstein cave castle in Surselva, up in the Alps in Canton Grisons, Switzerland. For how could people, nota bene the nobility, possibly live here? For generations! Perhaps 200 years or more, from AD 1300 on. In the middle of a vertical cliff; cramped – with moisture and frost and dirt and stench. But slightly away from brutality, it would seem. Secure. How else can it be explained that people lived in the middle of a vertical cliff?

Yes, the Middle Ages were brutal, with never-ending wars and conflicts; between “those who fought” – the elite of the time, but also involving the church and with grave consequences for common people. Conflicts about land and resources and trade and influence, religion. Politics of the time, in other words. And certainly everyday brutality too; people being hanged for less than we may want to know of, robbers along the road.

Security thus imperative, certainly for the nobility, though some castles show marks of fights and fire. There are about 50 of them in Surselva, most of them small and ruined, about one for each kilometre along the narrow valley; the Vorderrheintal – a source of the River Rhine. Most are situated high above the valley floor, at plateaus, spurs, hills. Kropfenstein is special. It is the only real cave castle, in the middle of a cliff. Which doesn’t mean that life would have been much more comfortable at the other, free-standing castles. Though there are a couple of exceptions.

The sheer number; 50 medieval castles along a short valley – and in addition numerous churches and chapels – and one big monastery, at Disentis. Security and religion. But there must be more to it; fashion, show-off of power – Zeitgeist, spirit of the time… For how else can it be explained that the nobility built such a vast number of castles? That the church actually managed to get people involved in building all these religious edifices?

But who built the castles and churches and chapels and monasteries? There must, in fact, have been a great little building industry in this little valley – with experts and workshops and artists and quarries and lime production facilities and forests to get all the timber and so on and so forth. For it is known that none of these buildings were made by common people or farmers. They were made by paid experts, with the farmers providing compulsory labour – Frondienst – a few days every year, mostly related to transportation of building materials.

Sure, Kropfenstein cave castle could never have been built by amateurs. It is laid out on a tiny shelf in the cliff, raised by rubble and ragstone of Ilanzer Verrucano, the green, metamorphic conglomerate and gritstone of the region, and a most durable lime mortar (at least when it’s not subject to direct precipitation). Though the building stones are of small formats, it was quite a feat to bring them from the hillsides just beside out to the cliff – to a deadly place with rough scaffolding and nothing but air below. With the front wall finished, the “back wall” made up by the overhanging cliff itself, the interior space was separated in two or three storeys, with timber and stone, in rooms and chambers, probably a representative “hall”, and the most important place – the kitchen, as well as the obligatory hole in the wall, at the extreme west; the lavatory. At least the shit got orderly disposed of. And everything to be reached by a crude path cut in the cliff, a constant reminder of death.

Summer may have been quite pleasant, here at the north, sunny side of the valley. But with security imperative, openings for sun and light were scarce. So they lived in the “dark”. And winters may have been not-so-pleasant, for it would have been difficult to keep moisture away, difficult to heat up such a home (where was the fireplace?), difficult even to access the place at times of heavy snowfall.

Summing up: a bold and brave construction (had there been such contests back then, it would have won an architectural prize!), but with absolutely nothing of what we consider essential for a “good life” today. But here we are at the heart of the matter, I guess. What was considered a “good life” in the Middle Ages would have been miles away from our own requirements and expectations.

And this was the residence of the elite. How would common people have lived in the Middle Ages? We think we know something from the rather romantic (but fascinating!) page-turners by authors such as Ken Follett (Pillars of the Earth) and Ildefonso Falcones (Cathedral of the Sea). And there are millions of dry historical accounts on the period… Yet, it may be that Ian Mortimer, with his compelling way of writing history (The Time Traveller’s Guide to Medieval England), come closest in giving an understanding of what it was like to be there, live there. Dirt, stench, brutality, racism, insecurity, disease… yes! But also vitality, innovation, multiculturalism, trade, grand schemes of art, architecture and engineering… Young people driving society. Few got old.

And gigantic differences between social classes. A truly contradictory period. Yet, slightly widening the perspective, not much more contradictory than the world, today.

The main space under the cliff, with a wooden beam still attached to the wall. Photo: Per Storemyr

Access to Kropfenstein is along a path cut into the cliff. Photo: Per Storemyr

Living in the cliff, with views to mountains, pastures, forests. Photo: Per Storemyr

A room with a view, yet the openings did not provide much light. Photo: Per Storemyr

A hole in the wall. The lavatory at Kropfenstein. Photo: Per Storemyr

The main space at Kropfenstein, which was divided in two or three storeys. Note the row of holes for wooden beams and all the small crenels. Photo: Per Storemyr 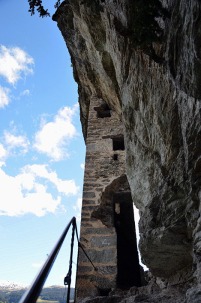 The narrow corridor leading to from the entrance to the main space. Photo: Per Storemyr

I work with the archaeology of old stone quarries, monuments and rock art. And try to figure out how they can be preserved. For us - and those after us. For the joy of old stone!
View all posts by Per Storemyr →
This entry was posted in Archaeology, Ruins, Switzerland and tagged castle, cave castle, Graubünden, Kropfenstein, life in the middle ages, ruin, Surselva, Switzerland. Bookmark the permalink.

2 Responses to Would you have liked to live here, at Kropfenstein medieval cave castle?