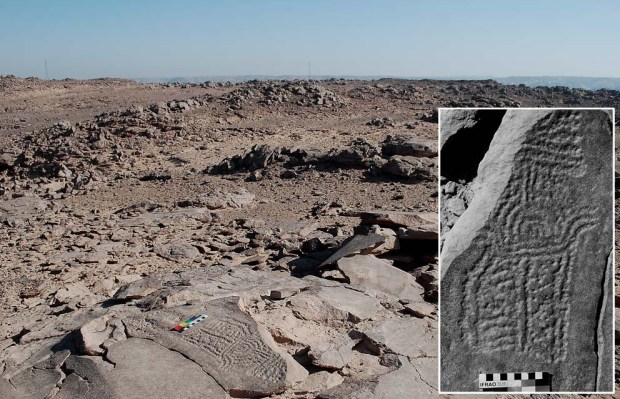 A year ago Dirk Huyge and I published a paper in the Sahara journal on a unique rock art “masterpiece” found among the Epipalaeolithic “geometric” (c. 5-9000 BC) assemblage at el-Hosh in Upper Egypt. Recently, we published another version of the discovery in Ancient Egypt Magazine.

The Epipalaeolithic geometric rock art assemblages in Egypt are now fairly well-known (further reading here) and some of their components, such as fish traps, can be reasonably well interpreted. But most motifs yet resist any closer identification and understanding of meaning. So also with the unique motif at el-Hosh. In the new paper we compare with a few other very intricate Epipalaeolithic motifs in Egypt, such as in Wadi Umm Salam in the Eastern Desert (see picture below) – in addition to describing the el-Hosh motif.

And we write: “It cannot be determined whether or not this design is entirely abstract or figurative in some way. P.S. proposes that it may represent elaborate headgear or a mask, whilst D.H. thinks it may be a geometricised topographical image. In the absence of any objects or documents from the Egyptian Epipalaeolithic archaeological record, at the moment it is not possible to relate the motif to any identifiable living creature or inanimate object.”

A complex geometric figure from Wadi Umm Salam (site SAL 12) in the Upper Egyptian Eastern Desert. Site originally found by the Eastern Desert Survey by “The Followers of Horus” in the 1990s. Photo: Per Storemyr

I work with the archaeology of old stone quarries, monuments and rock art. And try to figure out how they can be preserved. For us - and those after us. For the joy of old stone!
View all posts by Per Storemyr →
This entry was posted in Ancient Egypt, Archaeology, New publications, Rock art and tagged Ancient Egypt, el-Hosh, rock art. Bookmark the permalink.