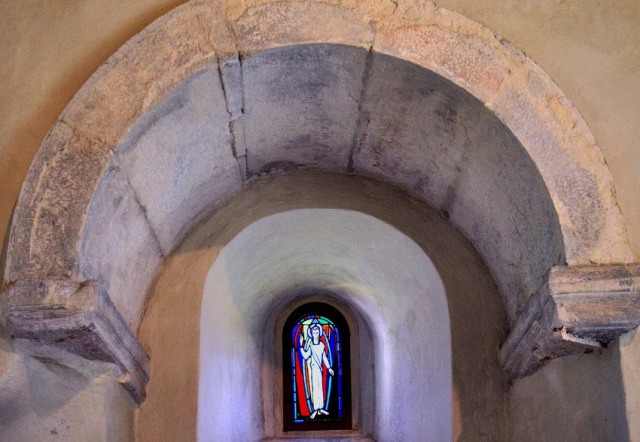 Marble arch above the choir window at Gildeskål church in Northern Norway. Photo by Per Storemyr

The small, Romanesque Gildeskål church is one of the most complete marble churches in Norway. It resides at the magnificent coast along the Atlantic Ocean far up north, in Nordland county. And it is, presumably, the northernmost marble church in the world. Together with Giske church further south, it is part of outstanding, but little known, medieval marble architecture in Norway, of which Nidaros Cathedral in Trondheim, with thousands of marble columns, is the most spectacular example.

Gildeskål marble church was the focus of a so-called “Grubleseminar” in 2013. My paper from the conference, focusing on building stone, is now available for download. It is a paper written in Norwegian, but it features an extended English abstract (see below) and many photos.

This is the impure Gildeskål marble. Photo by Per Storemyr

For international readers it may be interesting to know that Gildeskål probably is the northernmost medieval marble church/building in the world! It is situated, literally, on top of fine marble deposits! It is now whitewashed, but we now that there is marble “everywhere”, below render an whitewash. 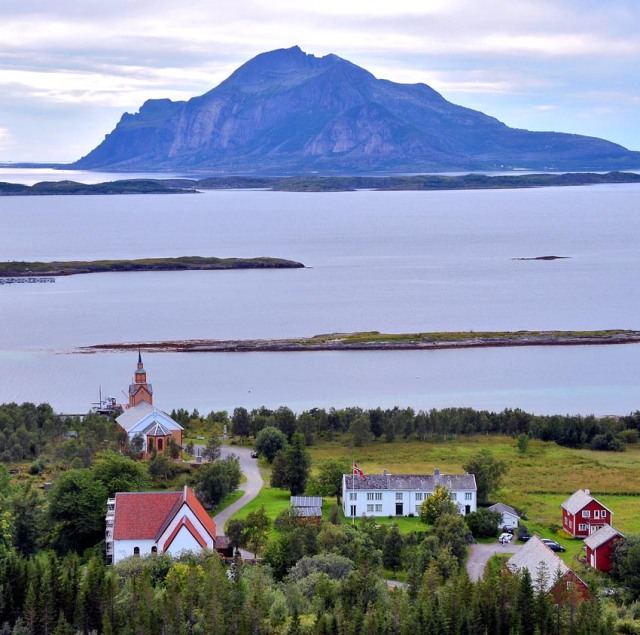 Gildeskål medieval marble church (low left). Far up in Northern Norway. With the Atlantic Ocean as the nearest neighbour. Photo by Per Storemyr

Marble was an important building stone in the Norwegian Middle Ages. Giske church, in the county of Møre og Romsdal, was built entirely from marble. And the world’s northernmost big medieval cathedral, Nidaros Cathedral in Trondheim, features thousands of marble columns – and a complete marble floor. However, the main building stone at the cathedral is soapstone, another of Norway’s fine building stones.

Nidaros Cathedral in Trondheim: Marble columns. Photo by Per Storemyr

Why is marble so important in Norway? The reason is geology! There is little “normal” building stone in the Norwegian geology, such as limestone and sandstone, which is so important farther south in Europe. Thus, as medieval builders explored local and regional stone deposits, they often found good, metamorphic stone like soapstone and marble – stones that were formed, mainly, during the development of the Caledonian Mountain Chain, some 400 million years ago.

Marble beach. At Gildeskål in Northern Norway. Photo by Per Storemyr.

Here’s my paper on Gildeskål church:

You can buy the whole boo with many articles bout the church from Fagbokforlaget.

And here’s the English abstract:

«True» marble (metamorphic limestone) was commonly used for ashlar and decoration in medieval churches in West Norway, especially in the middle part of the country (regions Møre and Trøndelag). The nearest European parallels can be found in the alpine region and, of course, in Italy. This is due to geological circumstances, with Central Europe and the British Isles almost devoid of true marble. In a Norwegian context, Gildeskål is nevertheless special. As one of two medieval churches, it is built directly on marble bedrock. This bedrock is part of a whole range of Cambro-Silurian limestone deposits in Nordland county, which were later transformed to marble during the Caledonian orogeny (mountain building process), about 400 million years ago. Renowned Fauske marble occurs in another regional marble belt, about 60 km east of Gildeskål, and has delivered stone for the international market since the 19th century.

The Gildeskål marble is banded, medium-grained, with calcite as the most important constituent. It contains smaller amounts of other minerals, such as mica, amphibole, quartz, graphite and pyrite. Hence, at a distance the colour appears off-white to greyish, with poorer varieties grading into dark grey, especially close to intercalated mica schist.

Since the marble deposit displays sub-horizontal, often open cleavage and is penetrated by vertical cracks at suitable intervals, it was easy for the medieval quarrymen to break loose or wedge out blocks. These are typically less than half a metre high and often more than a metre long. The stone thus is a good ragstone and minimal hewing was necessary to produce quite regular building blocks. The most homogeneous and whitest varieties are also suitable as a source for regular ashlar.

No medieval quarry has yet been found, but there can be little doubt that the marble was quarried in the near vicinity, perhaps by the shoreline, a few hundred metres to the west of the church. Old quarries may be hidden under vegetation, but it is also possible that stone was just broken loose from surface layers and even collected by the shore, thus leaving minimum traces of true extraction.

On studying the masonry, it becomes clear that the craftsmen carefully sorted the available stone in the surroundings. The best pieces went to ashlar (and a few decorative details), which was mainly put in use in the second building phase.

This phase comprised the upper part of the choir and parts of the nave. The first building phase, which may have followed a master plan laid out for the whole church, is characterised by good ragstone masonry. However, studies have shown that the western part of the nave may have a more complex building history; perhaps as a result of one or two fires (the last fire took place in 1710). Especially the west facade shows signs of heavy repair and is also built in another fashion than the rest of the church, with more irregular, rubble-like stone.

That the building practice heavily changed over time is also evident in the south transept, which was added after the 1710 fire. This part is largely built from mica schist and marble rubble, which is easily available a few tens of metres to the east of the church. Such stone can also be found in interior gable walls in the medieval part of the church. The gable walls also display some blocks of gneiss, which were undoubtedly collected along the shore.

In summary, the study shows that the use of stone at Gildeskål church can be viewed in the light of three important factors: 1) Changing fashions and building practice, including the availability of competent masons and stone cutters (ragstone, ashlar and rubble masonry); 2) local stone availability (various marble qualities, mica schist and loose stones by the shore); 3) The targeted sorting of local stone aimed for different purposes.

This article is based on a previous article written i Norwegian on this website, se here.

I work with the archaeology of old stone quarries, monuments and rock art. And try to figure out how they can be preserved. For us - and those after us. For the joy of old stone!
View all posts by Per Storemyr →
This entry was posted in Archaeology, Marble, New publications, Norway, Old quarries and tagged Cultural heritage, Gildeskål, marble, Middle Ages, North Atlantic, Norway, old quarries, quarry. Bookmark the permalink.